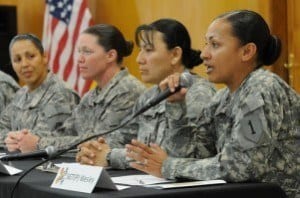 Continuing its tradition of promoting equal treatment of minorities and women before popular society catches on, Defense Secretary Leon Panetta announced Thursday that the U.S. military will remove its ban on women serving in combat roles, opening about 230,000 positions to women and making good on a commitment he made upon taking the office.

Due to personnel shortages, the Continental Army first lifted the ban on black enlistment in 1776. Now, from the same folks who ended the infamous “Don’t Ask, Don’t Tell” policy that prohibited gays from revealing their identities to fellow service people, the ban on women fighting in combat situations has been lifted.

“Women have shown great courage and sacrifice on and off the battlefield, contributed in unprecedented ways to the military’s mission and proven their ability to serve in an expanding number of roles,” Panetta said at a Pentagon news conference. “The department’s goal in rescinding the rule is to ensure that the mission is met with the best-qualified and most capable people, regardless of gender.”

Since 1994 women were not permitted to be enlisted below the brigade level, a force of about 3,500 troops, to fight on the ground.  That rule had officially barred women from all infantry, artillery, armor, combat engineers and special operations units of battalion size, about 700 troops, or lower, according to USA Today.

President Obama fully supports the policy change. “Earlier today I called Secretary of Defense Leon Panetta to express my strong support for this decision, which will strengthen our military, enhance our readiness, and be another step toward fulfilling our nation’s founding ideals of fairness and equality,” the president said in a prepared statement.

The military will have until January 2016 to implement the changes.  Leon Panetta and the joint chiefs, who whole heartedly endorsed the changes, had been working on implementing the policy for more than a year, according to USA Today.  Panetta is preparing to leave as Secretary of Defense, soon after President Obama nominated Chuck Hagel of Nebraska, a Vietnam combat veteran, to assume the position.