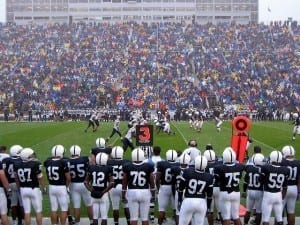 Death penalty for Penn State? The option remains on the table.

NCAA president Mark Emmert is continuing discussions with Penn State officials while waiting for an official response to the Freeh Report before deciding what judgment will be handed down to the institution.

Emmert told Tavis Smiley of PBS during an interview that he will not take anything, including the death penalty, off the table until he receives a detailed explanation from Penn State officials.

“I need to get a response back from them soon, right away,” Emmert said during the interview.

“I’ve never seen anything as egregious as this in terms of just overall conduct and behavior inside a university and hope never to see it again,” Emmert said. “What the appropriate penalties are, if there are determinations of violations, we’ll have to decide. We’ll hold in abeyance all of those decisions until we’ve actually decided what we want to do with the actual charges should there be any. And I don’t want to take anything off the table.”

Emmert has not ruled out imposing the equivalent of the death penalty for the Penn State football program, which would effectively dismantle the program for a number of years. It is also possible that Penn State will self-impose penalties including suspension of the program, reduction in scholarships and elimination of postseason-play.

According to the 267-page Freeh Report, which was released Thursday morning:

The most saddening finding by the Special Investigative Counsel is the total and consigned disregard by the most senior leaders at Penn State for the safety and welfare of Sandusky’s child victims.

Four of the most powerful people at The Pennsylvania State University – President Graham B. Spanier, Senior Vice President-Finance and Business Gary C. Schultz, Athletic Director Timothy M. Curley and Head Football Coach Joseph V. Paterno – failed to protect against a child sexual predator harming children for over a decade. These men concealed Sandusky’s activities from the Board of Trustees, the University community and authorities.

The death penalty for Penn State speculation is rampant, but Penn State football players are doing their best to stay focused on the future.

Senior defensive tackle Jordan Hill said of the speculation, “When you hear the ‘death penalty’ you think it can’t happen but with all things you just don’t know what will happen. When that time comes, if it comes, then we’ll worry about that. Right now our eyes are looking forward to what’s coming up.”

“It’s definitely a tough situation that we’re in here, but we have no control over what is going on,” said quarterback Matt McGloin. “All we need to do is continue to focus on the rest of this summer, take it day by day and prepare ourselves for camp and for Ohio on Sept. 1.”

But the question remains, will these players have football to look forward to? Do the sins of a coach, and the subsequent cover-up by university officials, warrant the death of a storied program and, if so, for how long?

Weigh in with your comments and let College News know whether you favor the death penalty for Penn State or not.