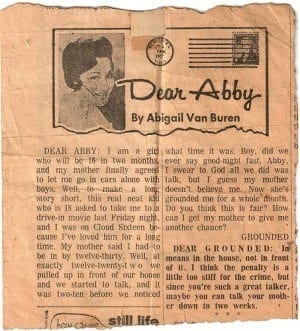 Pauline Friedman Phillips, author of the Dear Abby column, passed away on Wednesday in Minneapolis.

Dear Abby was known for her short quips and sassy responses to the thousands of readers who wrote in seeking advice on there marriage, roommates, sex lives, neighbors and family issues.

America fell in love with Dear Abby in the 50s and 60s, before daytime talk shows were popular, as they were able to be honest and candid about their problems and they humored her short, feisty, no nonsense replies. Dear Abby received 3,000 to 25,000 letters a week according to WashingtonPost.com.

One of Dear Abby’s latest columns was from a reader who wrote in with concerns about a gay coupled who’d just moved into the neighborhood. The reader explained that they and other neighbors were concerned with the kind of company the two men kept and wanted to know what they could do to improve the neighborhood.

“You could move.” Abby responded.

Phillips was candidly in support of many things like abortion rights, AIDS testing and education and supporting different organizing like the March of Dimes and the womens movement (ERA) to LATimes.com.

Abby was short for Abigail Van Buren, a name the columnist took on soon after the self-proclaimed homemaker snagged the job by challenging a San Francisco editor to let her prove that she could write a better advice column than their current writer. The editor, impressed with her confidence but unsure of her inexperience, gave her a chance to improve herself. Needless to say, he was nothing short of impressed.

For many years, Dear Abby was in competitions with Ann Landers another advice columnist who also happened to be Phillips twin sister, Ester Pauline Phillips. The two had a public falling out after Dear Abby, previously Ann Landers apprentice, became heavy competition and eventually sky rocketed to syndication.

The two Sioux City, Iowa natives reconciled their differences and rekindled their inseparable relationship before the sister, Ester Pauline Phillips, died in 2002. Dear Abby announced that she had Alzheimer’s the same year.

After the announcement, Pauline Friedman Phillips began to co-write the column with her daughter, Jeanne Phillips, who has become her mother’s successor and says she has “very big high heels to fill”.