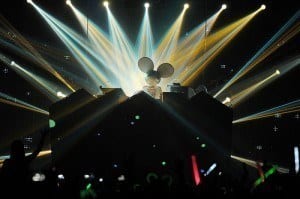 Deadmau5 pulled a friendly prank on fellow dubstep artist, Skrillex, last night on the red carpet.  Donning the signature mouse head, deadmau5 also wore a black t-shirt imprinted with Skrillex’s phone number and the phrase, “U mad bro?”  He also tweeted a picture of himself along with the text, “Maximum trolling achieved.”  Skrillex didn’t take the prank to heart; tweeting, “Haha @deadmau5 just wore my phone number on his fokin shirt on tv gotta retire this phone.”  After the the Grammys, however, there was no way Skrillex could have been mad about anything; he walked in with five nominations and walked out with three awards and deadmau5 left empty handed.

Deadmau5 had been nominated for Best Dance/Electronia Album for his LP “4×4=12,” Best Dance Recording for “Raise Your Weapon” and Best Remixed Recording for the remix of “Rope” by the Foo Fighters.  Skrillex beat deadmau5 in Best Album and Best Recording of the same name, “Scary Monsters and Nice Sprites,” and Best Remix for his collaboration with Benny Benassi in “Cinema.”

This years Grammys was big not just for Skrillex but for the whole Electronic Dance Music (EDM) community.  David Guetta, who has collaborated with Usher and Nicki Minaj, told MTV, “It’s really exciting, because they wanted to acknowledge electronic dance music, and I think it’s amazing for our scene to finally get the respect that I think it deserves.”

David Guetta started the eight minute EDM performance with Chris Brown and Lil’ Wayne.  Three and a half minutes into the performance, the camera pans the crowd and the Foo Fighters began playing their newest single, “Rope”, behind a white curtain.  Deadmau5 joined halfway through their performance atop his signature platform, and according to inthemix, provided a live remix of the last half of the song.