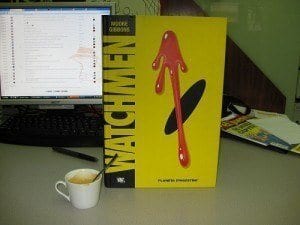 The prequels of “Watchmen” are expected to be arriving to a bookstore near you in Summer 2012.

DC Entertainment plans on releasing a series of prequels to “Watchmen,” due this summer.

The series will include seven miniseries that will focus on a specific character.

Co-publishers Dan DiDio and Jim Lee said, “It’s our responsibility as publishers to find new ways to keep all of our characters relevant. After 25 years, the Watchmen are classic characters whose time has come for new stories to be told. We sought out the best writers and artists in the industry to build on the complex mythology of the original.”

Original writer Alan Moore will not be contributing and Dave Gibbons, original illustrator mentioned that the story that Alan Moore and him released was the complete story but that he “appreciates DC’s reasons for this initiative and the wish of the artists and writers involved to pay tribute to our work.”