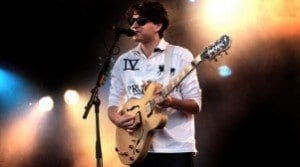 The final notes of the grandest fest

The Mowgli’s played on the BMI stage, which is the smallest venue at Lollapalooza. With the audience mixed in amongst the tress, their set had an intimate feel. The band out of southern California kicked it off with “Waiting for the Dawn,” fueling the electricity and excitement in the crowd. The eight-piece crew also played their new song “Love is Easy,” which was proceed by a “world record setting” group hug. They closed with their jam “San Francisco,” which reached 13 on Billboard’s alternative chart.

Tegan and Sara, with their powerful harmonies and sound reminiscent of Joan Jett and the Cranberries, drew a crowd nearly as large as any of the weekend headliner. Their tune “I was a Fool” truly showcased their virtuosity as musicians. Though, what really took us off guard with the range of both of their vocals. It was easy to forget that such power was coming out of the two tiny women on stage. Their music and lyrics are proof that they are old souls, channeling emotions that are deep and meaningful.

New York rockers Vampire Weekend helped show everyone what Lolla is really about-listening to amazing music and getting drunk with good people. It’s been a year since the band has set foot in Chicago, and making a return in the beautiful Grant Park, showcasing their new album “Modern Vampires of the City” seems like a brilliant return. Beyond the artists performing on the Perry Stage, there were few other bands that actually got the half intoxicated crowd dancing like Vampire Weekend did.

With the sun setting on the three-day fest, The Cure helped cap off the night with classics like “Just Like Heaven,” “In Between Days” and “Lovesong.”

So Lolla, we will miss you. The next year seems like a long time to wait, but we know that you’ll have some big performance in store for us. But just to remind you, don’t go cheating on Chicago with another city.

Here are a few bands that we are bummed we missed:

Previous ArticleMophie Juice Pack Powerstation – A mobile battery lifesaverNext ArticlePowerball: A game of chance that could win you $400 million