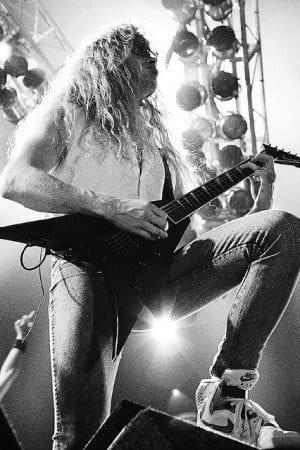 Dave Mustaine, the lead singer of heavy-metal band Megadeth, has stated he believes President Barack Obama is responsible for the recent mass shootings in Aurora, Colorado and Oak Creek, Wisconsin.

Dave Mustaine appeared at a concert last week in Singapore and made the following statement:

“Back in my country, my president is trying to pass a gun ban. So he’s staging all of these murders, like the Fast and Furious thing down at the border and Aurora, Colorado, all the people that were killed there. And now the beautiful people at the Sikh temple.”

Mustaine’s statement drew a confused response from audience members as Mustaine continued, “I don’t know where I’m gonna live if America keeps going the way it’s going because it looks like it’s turning into Nazi America.”

Dave Mustaine has voiced his dislike for President Obama numerous times in recent months. As an outspoken “birther,” someone who questions the validity of President Obama’s birth certificate, Mustaine said in a March interview with radio host Alex Jones, “With all of the proof about his birth certificate being fake. And you see the signs in Kenya that say ‘the birthplace of Barack Obama.’ Hello?! C’mon, guys. How stupid are we right now?”

“I was floored the other day to see that Mitt Romney’s five boys have a $100 million trust fund,” Mustaine told MusicRadar.com. “Where does a guy make that much money?”

The latest album from Megadeth, Th1rt3en, topped the Hard Rock albums chart on its release in late 2011. The band’s past albums include the 1986 Peace Sells… But Who’s Buying?, the 1990 Rust in Peace and the 1992 Countdown to Extinction, which fostered the band’s only Hot 100 entry, Symphony of Destruction.