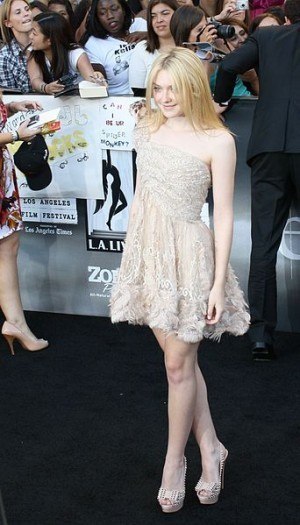 Shortly after her controversial Cosmo cover

Dakota Fanning turned 18-years-old today, unveiling a poster of her upcoming film “Now Is Good.” The child star, now all grown up, has been in Hollywood’s spotlight for over a decade and has acted alongside many A-list actors including Denzel Washington in “Man on Fire” and Sean Penn in her breakout film “I Am Sam.”

IMDB reports Fanning will play the role of Tessa Scott, “A girl dying of leukemia compiles a list of things she’d like to do before passing away. Topping the list is her desire to lose her virginity.”

The news of Fanning’s birthday comes after the actress’s recent controversial spectacle on the cover of Cosmopolitan magazine. Fanning was a minor at the time the edition published this month’s issue. Fanning was placed on the cover with captions reading “His Best Sex Ever,” and, “Too Naughty To Stay Here: But You Have to Try This Sex Trick.” The parallel seems rather evident to her upcoming role, where her number one desire is to lose her virginity.

A Cosmopolitan representative told Fox News, “We’re thrilled to feature Dakota Fanning on the February cover of Cosmopolitan Magazine, and she looks stunning. Dakota, who turns 18 this month, is a mature, fearless young woman and we are proud to honor her as our Fun Fearless Female of the year.” With her teen years behind her, the arguments for and against Fanning’s “Cosmopolitan” issue have become mute.

Fanning claims, ‘I’m interested in good characters and the experience,’ when describing her upcoming role. “Now Is Good” has no set release date.