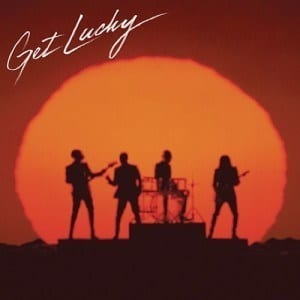 “Get Lucky” was first exposed to the world on an episode of Saturday Night Live where just snippets of the song were shown. Of course, the Internet followed the release with fake, full-length versions of the track.

Daft Punk collaborated with Pharrell Williams on vocals on Nile Rodgers on guitar on “Get Lucky”.

Leading up to the real release of the track, Dutch DJ Michiel Veenstra played a copy of what he called the real song and posted a video of himself playing the track on YouTube, too. He said people emailed him the song, and he thought it sounded real enough to play. He said he received texts and calls about the song from Columbia Records while he was playing it on air.

The single is the first off of Daft Punk’s upcoming album “Random Access Memories,” which has become the most anticipated album of the year. It is set to release May 21. It will be their first album since 2005’s “Human After All” and their first released work since 2010’s “TRON: Legacy” soundtrack.

The track list for “Random Access Memories” was released this week, and the album will feature Giorgio Moroder, Julian Casablancas, Paul Williams, Todd Edwards and Panda Bear from Animal Collective.