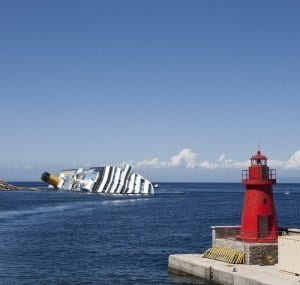 Can the Costa Concordia, a ship two and a half times the size of the Titanic, be successfully salvaged?

The Costa Concordia is being pulled from its underwater resting place, near the island of Giglio, in an unprecedented maritime salvage. Over a year has passed since the large vessel ran aground and sunk near a small island off the coast of Italy. The ship, which ran aground in January of 2012, killed 32 of its 4,200 passengers.

The Costa Concordia will be salvaged in a process called parbuckling. This process involves submerging part of the ship before rotating it onto platforms located 30 meters below the surface of the water. Detaching the ship from the reef took a total of three hours. Sergio Girotto, the engineer behind this maritime salvage, told CNN that the operation could take as little as 12 hours, saying, “I don’t think we will continue into the night. After we start pulling we should see something.” However, salvaging the 114,000 ton vessel could take up to two days. Senior salvage master Nick Sloane expressed optimism regarding the success of the maritime salvage.

Righting the Costa Concordia has cost the cruise line $800 million so far. Normally crews would simply take apart the ship, avoiding this expensive endeavor. However, this is not an option in the case of the Costa Concordia. The ship is said to house many noxious substances as well as the remains of two missing passengers.

Russel Rebello of India and Maria Grazia Trecarichi of Italy are the two missing passengers of the Costa Concordia. Rebello worked as a waiter on the cruise ship and was last seen helping passengers evacuate the sinking vessel. Trecarichi was aboard the ship with her 17-year-old daughter who survived the disaster. Family members of the missing victims hope that parbuckling the ship will result in finding the missing remains of their relatives. So far, no bodies have been found.

The inventory of the Costa Concordia reveals that the ship is filled with substances that could have a dire effect on the surrounding environment, contaminating the waters of Giglio. The ship is housing thousands of liters of paint thinners, insecticides, thick lubricants and glue. Ten tanks of oxygen and 3,292 liters of Carbon Dioxide are also housed on the ship. Additionally, freezers which have survived the intense water pressure still house rotting foods, including: 1,268 kilograms of chicken, 8,200 kilograms of beef and 2,460 kilograms of cheese.

Salvaging the Costa Concordia is a delicate matter. Once the ship has been rotated and placed successfully on platforms, the water which has entered the vessel will have to be removed and cleaned. The ship is not expected to be afloat before Spring of 2014. The Costa Concordia will then be towed to a port and dismantled. The property of passengers will eventually be returned.

The man responsible for the Costa Concordia disaster, ship captain Francesco Schettino will face trial Sept. 23. He is charged with manslaughter, maritime disaster and abandoning a ship with passengers still on board.