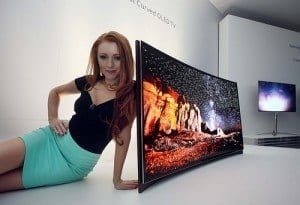 Smarthouses, unbelievable TV developments, and something called an Oculus Rift

The Consumer Electronics Show in Las Vegas is headlined by HD TVs, cameras to make any photog swoon, and new gadgets for the gaming kiddies amidst the usual new phones, laptops and relative paraphernalia showcased.  A roundup of some of the best to follow.

Electronics usually begs information about the latest in entertainment technology, so here goes.  In the world of TV, we’ve bi-passed the disappointing and somewhat polarizing advent of 3D TV for something way cooler—namely, Haier’s “TV of the Future.”  If you have been dreaming of the day when “Back to the Future’s” voice control becomes a reality, you need to move on to the next big thing.  Haier’s newest product lets the laziest (or most efficient) viewers use their eyes, that is to say their brains in place of an electronic remote.  That’s right, NeuroSky has found a way to read your mind, and deliver.  Oh and Samsung has created a TV that lets you view two totally different programs at the same time.  Seems the days of the remote control are numbered.

In the same vein, CES debuted the latest version of the Oculus Rift, or for the n00bs out there, an electronic virtual reality headset.  This little nugget tracks your head movement to give you a never-before-felt firsthand experience through videogames.  It’s reported to feel so real that at first you feel motion sickness.  We’re all praying for this one to get released from development real soon.

Electronic, or digital, cameras have undergone their fair share of tweaks and modifications.  While Nikon declined to release a new and amazing version of the ultimate unwieldy camera, they did showcase a number of nice new lenses and two new Nikon compact cameras for those who want to actually move and shoot simultaneously.  This year’s next big thing camera-wise continues to be Wi-Fi capability, with Sony and Samsung at the forefront.  Anyone that was excited about a desktop version of Instagram will know the immediate social media implications of this development.

Other cool electronic didn’t-know-you-needed-it-until-now include the Pebble smart watch, that syncs with your smartphone to coordinate running Apps, news, and any number of imaginable future features.  Whirlpool gave us an electronic Bluetooth Fridge that streams music, iTwin a USB that lets you browse NSFW and restricted sites at, well work, duh, and for the ladies—Bodymetrics has developed an electronic “virtual dressing room” for the avid online shopper.

Ecstatic electronic orgasm rounds off with exciting news—2013 has become “the year” for SmartHouse development.  Regulate everything, (blinds, TV, fireplace) electronically off your phone or tablet.  Check on the kids or the pets or the neighbor’s dog that regularly relieves himself on your lawn.  Have your fridge electronically voice any contents you need to re-up.  The best part?  A toilet seat that automatically heats up 10 minutes before you rise from your slumber.  Paradise found.