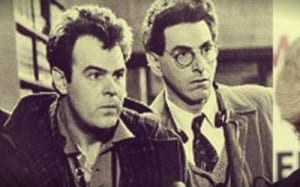 Harold Ramis, who has proven to be a comedic wunderkind throughout decades of his classic work, died on Monday in Chicago. Harold Ramis wore multiple hats in the comedy industry, excelling in acting, directing and writing for cult comedies like Ghostbusters, Groundhog Day, Animal House and   CaddyShack.

Harold Ramis got his first big comedy gig when he was hired as Playboy’s reviewer and joke editor and was ultimately promoted as associate editor. Simultaneously, Ramis was also enrolled at Chicago’s famous Second City improvisational comedy group, which was the starting place of most Saturday Night Live’s cast throughout the year.

It was at Second City that Ramis met John Belushi, who went on to work together on The National Lampoon’s Radio Hour.  It was this work with National Lampoon that would lead him to write the script for National Lampoon’s Animal House, which would send his career into the comedic stratosphere and also be the inspiration for every toga-themed frat party that any college student has ever attended.

Ramis went on to write scripts for some of the most famous comedic films in history like the blockbuster hit Ghostbusters and Ghostbusters 2, which he also starred in as the straight-laced Egon Spengler.

Ramis’ film Groundhog Day was noted by Ramis as his “masterpiece” and has been the subject of many religious discussions, even becoming a talking point in many Buddhist studies due to it’s apparent themes of rebirth. However, Ramis’ mentioned to The New York Times that he wasn’t a part of any organized religion.

“Although I am wearing meditation beads on my wrist,” he explained. “But that’s because I’m on a Buddhist diet. They’re supposed to remind me not to eat, but actually get in the way when I am cutting my steak.”