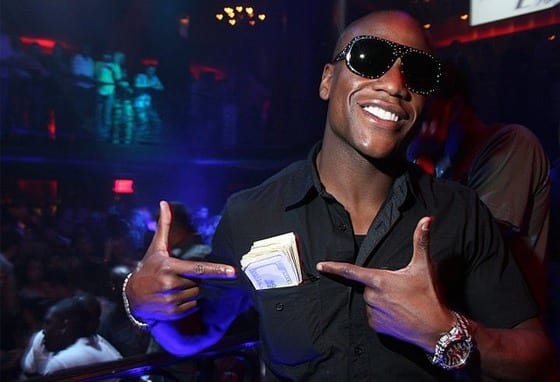 We are closing in on the end to an illustrious era. Sports as we know it is going through the changing of the guard and the dynamic of the sports world will discover new champions and new athletes that will set the standard for the next decade or two. That change starts with boxing’s biggest name Floyd Mayweather fighting his final fight on Saturday September 12th against a strong competitor Andre Berto (30-3). This will be Floyd’s last chance to show off his one of a kind skill set that has led to his dominance over the past two decades.

Mayweather has been pretty low-key since the Manny Pacquaio fight in May that grossed nearly $300 million the largest revenue in boxing history. Now that the boisterous champion has reached his final match of his six fight contract deal with Showtime, he now has a chance to tie the great Rocky Marciano who finished his career 49-0. Floyd who goes by TBE “The Best Ever” has the record and legacy to match any fighter you can name. His speed has yet to meet a match in 19 years as a professional.  Mayweather’s career complete with controversy and misunderstandings is coming to an end and we should be proud to have witnessed such American greatness.

Read: GGG vs Lemieux can be the fight of the year

Now that we have gotten past the legacy of Mayweather, I think we should discuss his business savvy and how it has taught a generation of boxers and young black men how to stand on their own. Mayweather is famous for his in your face bad guy persona that seems to work against him most of the time but his moves in the business world garners much respect. After buying out his contract from Bob Arum for $75 million and starting Mayweather Promotions he has been the biggest money generator in the sport. He is now the highest paid athlete in the world and runs one of the most successful businesses and brands TMT (The Money Team) and Mayweather Promotions in the sports world. His growth in business has reported in him bringing over $500 million in revenue as a prize fighter (this is also a reason of some the hatred he gets). Yes that is a real figure and a young black man from Flint, Michigan is the one who accomplished it all with his family right beside him.

Though his life outside of the ring is far from perfect he still is a representation of hard work and dedication to a craft. He goes into Saturday’s fight with more controversy as rumors of an illegal IV injection May 1st the day before his mega fight with Manny Pacquiao earlier this year came to surface this week. Even though the reports indicate more of a problem with USADA protocol than Mayweather who reportedly took a 250ml IV of saline and Vitamins to help with dehydration, it is just another distraction for the champion to worry about as his next fight approaches. Staying focus through turmoil has been one of Mayweather’s greatest strengths. He faces adversity with the best of them and always come out on top.

Going Out On Top

We have been blessed to see one of the greatest athletes of our generation dominate his sport unlike anyone else. He only rivals Roger Federer and Serena Williams when it comes to dominance in this century.  In most cases when the guy at the top is deciding to retire it is because he is old and the younger guys are just a step ahead of him. In Mayweather’s case he is still top bill and in great mental and physical shape but he still feels it is time to hang it up and turn his focus solely on promoting. One thing boxing needs is a promoter who knows how to generate money and with Mayweather out of the picture as a fighter I have some interest to find out if his perfect record will stand the test of time and follow him in the meeting room as well.

The Sporting world will be different come Sunday morning and it will begin the end of an era and true legacy. Kobe Bryant will be entering his final year as well, if you are my age or older this is not an easy topic for you to discuss. Do you think Mayweather will continue his undefeated record or will Berto give the Champ his first loss in his final match?