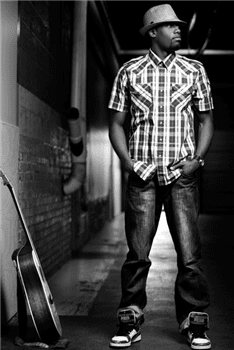 We also feature our runner-ups

Levi’s affinity for singing can be attributed to growing up in the Washington, D.C. area in a home he remembers being filled with music. “My father was a big music head. We grew up listening to all kinds of really good music. Music was bigger than TV.” Like many artists, his musical roots began in church where Levi, like his father, sang and played the piano. Outside of the church, young Levi was exposed to artists like Stevie Wonder, Bill Withers and Donny Hathaway. In addition to those soul legends, The Beatles, Paul Simon, James Taylor, Jimi Hendrix and Prince all made their mark on Levi’s musical style and led him to the guitar which was the final piece needed to create his sound.

Levi’s ability to incorporate multiple influences into his music can also be attributed to his role as a producer. Along with his two partners at Kollective Music, Levi has written and produced songs on 702’s 2003 album “Star”, (Places and Certified), Raheem Devaughn’s 2005 album, “The Love Experience” (Believe) and the Fat Albert Movie Soundtrack (Come on and Join the Gang).

With each song he writes, Levi’s goal is timelessness. “I feel like that kind of music will always have a place and staying power” he says. His songs explore a variety of relevant subjects while including the elements that always stand the test of time; musicianship, strong lyrics, and shared experiences. This line of thought is even reflected in the cover songs that Levi chooses to perform.

In the true spirit of an indie artist, Levi is already planning his next move: “In 5 years, I want to have 2-3 albums done and be writing and producing for other artists. Then I want to work for Disney!” A place that is synonymous with excitement, lasting memories, and happiness would be a fitting home for an artist who evokes all of those emotions with his music. Until then, Levi Stephens is taking listeners to his own carefully-crafted “happy place” by tackling love, life, and everything in between with his always relateable and intelligent spin.

HAVi is an independent hip hop artist from Washington state. As a writer, producer, and performer, HAVi is known for his standout lyrical ability, unique production and realistic subject matter.

At the beginning stages of his music career, HAVi independently promotes himself on Facebook and Twitter, looking for fans that appreciate music about real life emotions and experiences. HAVi has opened up for nationally known artists such as Raekwon (from the Wu-Tang Clan), Crooked I (from supergroup ‘Slaughterhouse’) and has also performed with well-known artists from Washington state.

“When it is all said and done, I plan to go down as one of the greatest to ever do it. All I need is people that actually show support for my music and believe they can make a difference.”

Currently, HAVi is preparing for the release of his, entirely self-produced, album, “Self-Portrait.”

Not only is this album called, ‘Self-Portrait’ because every aspect of it was created by HAVi (writing, recording, production), it also represents everyone’s attempt to create their own ‘Self-Portrait using the social networking tools of today.

“Everyone seems to be trying to create their own “Self-Portrait” to make sure they leave their imprint on the world before they are gone. I hope this album will leave a mark I am remembered for.”

All members of ParaDyce! are natives of the NY/NJ/Conn tri-state area, and have been performing professionally for over 15 years, all over the world. They are now moving in a new direction, and are creating nothing but good music!

And the runner-ups are …