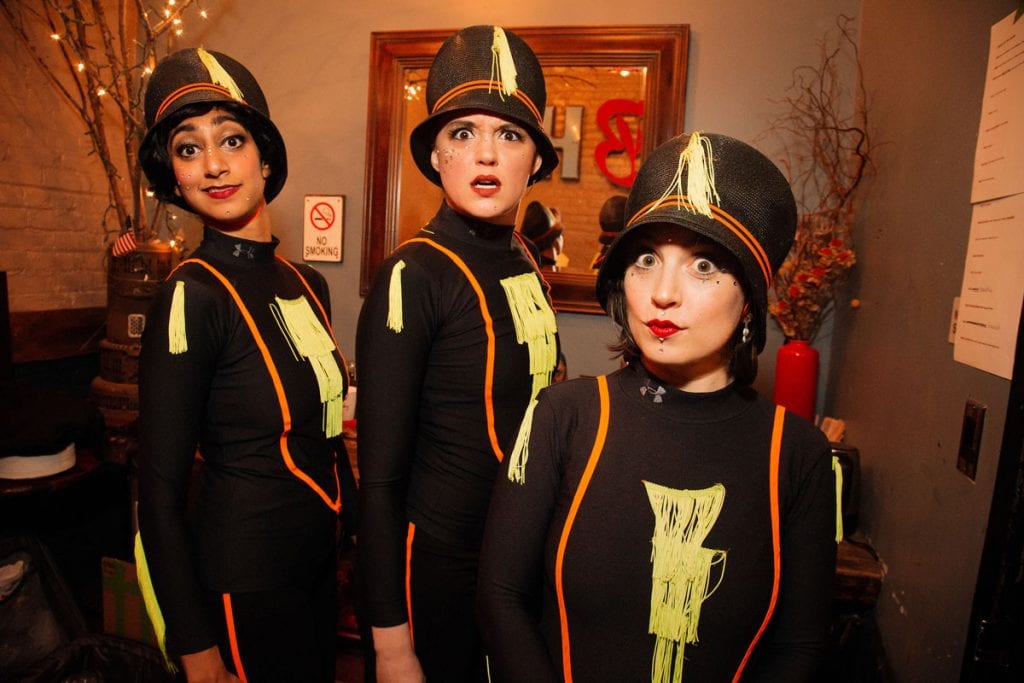 As “I’m Every Woman” starts playing, three women dressed in head-to-toe blue spandex bodysuits tumble out from behind a curtain. They are the Cocoon Central Dance Team, they are performing their new show Garden Party and with it they are pushing the frontiers of both dance and comedy.

“Thank you, Ohio!” they yell with a bow after the end of their number to the audience in London that is watching the show during it’s two-week run at the Soho Theatre.

Before and after ? ty London! 11 more

They call themselves a choreographed dance-comedy act, which is accurate although doesn’t depict the full range of what their performances entail. Yes, it’s dancing and comedy—but it’s also a sketch show. It has the vibe of a funny movie you make in your bedroom with your high school best friends just for yourselves. It’s a performance about a too real and also very exaggerated friendship. It seems like it would be ironic, but it’s wholesomely earnest.

And it’s also really good dancing. This shouldn’t be surprising, given that the women behind it, Sunita Mani, Tallie Medel and Eleanore Pienta, are all professionals performers. They have backgrounds in dance and are comedians and actors who have been at it for a while. But when you hear “dance-comedy act” the first reaction is that the dancing must be a joke, so the professionalism of their choreography delights as much as their humor.

“Dancing well is a priority,” Pienta says, “What’s funny is not that it’s bad dancing but the juxtaposition of moves and our (facial) physicality. I think all three of us have really high standards when it comes to what we put in the world, so we will ruminate on an 8-count for a whole rehearsal.

Mani, Medel and Pienta became friends during their freshman year at Emerson College in Boston—an institution of comedy that has produced the likes of Jay Leno, David Cross and Jennifer Coolidge.

“I loved dancing with Eleanore and Sunita at parties because they dance like me: big physicality,” Medel says. “We ran in concentric circles in the Emerson comedy scene and ended up forming a troupe with friends.”

Cocoon started a few years after that when they moved to New York and shared an apartment in Brooklyn.

“That was our way of keeping busy and optimistic in our Sunset Park apartment,” Medel says about their origin. “Our friends (one of whom is now my husband) asked us to bring pieces regularly to their Brooklyn variety show The Moon, and we just kept going.”

“We then became the house dancers and then booked gigs from there. The rest is history,” Pienta says.

“I loved dancing with Eleanore and Sunita at parties because they dance like me: big physicality.”

Garden Party, their show currently running in London, was created specifically for this tour, although it includes some of their favorite choreography, like their dance to Beyoncé’s “Love on Top.”

Yeah baby. New show with heartbreak and ass shake @arsnovanyc 7.15.19 Come see us one last time before we head on over to London Town!

“We wanted to create a new narrative for the Soho Theatre,” Medel says. “We started moving toward a story where Cocoon ends up separated and working in office positions [and] we could reunite at the end of the show. We also needed to challenge ourselves as writers to see whether we could tell a story with a beginning, middle and end. Getting to this point was like pulling teeth but we had to see whether we could follow a classic structure.”

Pienta adds: “We basically had one month where we were going to be together in the same city, so we re-contextualized established dances of ours and built a narrative around it.”

Garden Party is funny and absurd, while managing to hit some resonant notes about friendship. At a moment when media is starting to pay attention to stories about female friendship, Cocoon’s show, invoking the energy of Oprah and Beyoncé, feels like a relevant contribution.

Three more GARDEN PARTYs at @sohotheatre ??? Make it a double feature and stick around for @nickthune 9:30peem, that's what we're doing, be like us, we're incredible! linkadabink pic.twitter.com/v4QSpNiqj8

The future of Cocoon

After their London tour, Mani, Medel and Pienta want to bring the show back to New York for another run. They’d also love to tour their hometowns at some point—Eleanore is from Valatie, NY, Sunita is from Dickson, TN, and Medel is from Ketchikan, AK.

These days, it’s hard to find the time to sync schedules. Mani is a regular on the Netflix series GLOW, and Medel and Pienta have their own burgeoning careers in comedy and film that take them all in different directions.

“The one thing I know for certain, is that there is this film idea we’ve been kicking around for five, six years that I would love for us to make,” Pienta says. “Because of our schedules, a film actually feels the most feasible.”

Cocoon already has a film out, Snowy Bing Bongs: Across the North Star Combat Zone, which they made with Alex Fischer and Rachel Wolther. The film came out in 2017 and was a hit, particularly among the comedy world.

Whatever comes next (“I would love to do a 50th anniversary show in 2059,” says Medel), Cocoon—so named because of the protective nature a cocoon provides to what’s in it—will continue to be an outlet for the trio.

“Sunita and Eleanore are the wisest, funniest, most generous artists with whom you can work,” Medel says.

Mani adds: “Cocoon is a dream come true! We have lived an organic adventure as a dance comedy trio and our path reveals itself as we sashay away.”