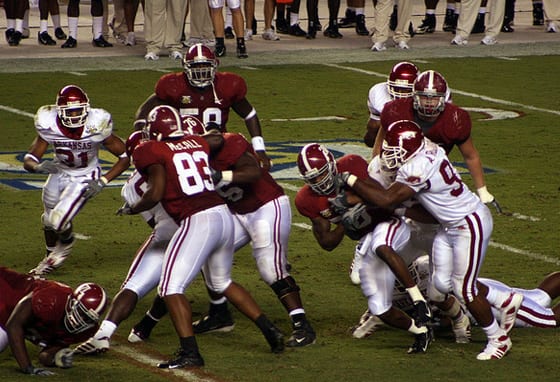 The college football season has come to close and the final bowl game is set. The Clemson Tigers will take on the Alabama Crimson Tide in a match up that puts a growing Clemson program up against the powerhouse Alabama. Both college football teams are playing their best football at the right time. Clemson who is undefeated at 14-0 has lead the way most of the season leaving little doubt in their #1 ranking. On the other hand, Alabama is a veteran to championship games. Almost seemingly making a run every other season, the Nick Saban lead Tide look prime to take their coveted title back to Alabama. A win would put Saban in a coaching class of his own.

Road to the Championship

Lead by coach Dabo Swinney, Clemson lead the way most of the year which ended with an electrifying win against North Carolina in the ACC Championship game. They won the game 45-37 solidifying themselves with the #1 seed in the Bowl Championships. As the 1 seed they had the opportunity to take on the blazing hot Oklahoma Sooners who despite their winning streak proved to be no match for the Tigers. Outplaying the Sooners most of the night, Clemson was able to lock in their bid for a championship with a 37-17 victory in the Capital One Orange Bowl.

Alabama took the scenic route to this year’s National college football championship game. After an unexpected loss at home against Ole Miss in week 3 of the season, Alabama faced an uphill battle to stay in contention. With road games against the likes of Auburn, Mississippi State and Texas A&M the odds were against the powerhouse program. Despite their rough schedule, Alabama managed to take on all comers and take their winning streak to 11 games. In the SEC Championship, Alabama smothered the Florida Gators resulting in a 29-15 win which propelled them to a 2 seed in the Bowl Championships. As the 2 seed they drew an interesting matchup against a strong Michigan State team who came off one of their strongest seasons to date. Alabama dominated the Spartans, winning the Goodyear Cotton Bowl in a blowout 38-0. One of the more embarrassing games this bowl season.

This is what we’ve all been waiting for during the college football season. Who is the supreme program of 2015? Clemson comes with an undefeated record following a commanding win over one of the hotter teams in the nation Oklahoma. This is a battle between stout defenses, one of which has a secondary that rivals some of the great programs of the 90s. Clemson will bring a different kind of challenge for Alabama. A team that can move the ball on the offensive side as well as keep their opponents from moving the ball just the same. Clemson’s D is ranked in the top 20 nationally in total defense, defensive scoring, rushing and passing efficiency. These allow the tigers to really control the game against an Alabama team who has yet to face a team with equal talent and skill at multiple positions as the tigers do.

Alabama on the other hand is arguably the best defense in the land. Taking home #1 rankings in sacks, scoring and rushing defense. Now we can expect their defense to show up in the championship game on January 11th but what will make a difference is which team can cause turnovers from their opponent. Both teams pride themselves on stingy defense and taking care of the ball. It will ultimately come down to who can secure the ball in the clutch moments. Clemson has an ability to open up the field but will they be able to against the attacking defense of Alabama? This will be one of the better championship matchups in a while. Clemson looks to take their program to the next level and Alabama tries to continue their decade of dominance.

The National Championship will be the culmination of a wonderful season. Especially because my Wolverines are back to their winning ways. In my household we love college football like athletes love their cars and we look forward to seeing Alabama go down. I am picking Clemson to win it all in a 37-31 victory. Who do you think will win the college football national championship? Leave a comment and let me know.

You will also like: Michigan Mania, Wolverines leap into AP Top 25