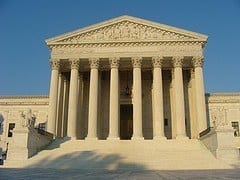 His cryptic remark, according to the court transcript, was simply: “Well-he did not,” which Clarence Thomas apparently mumbled under his breath during court arguments. It was the first word Thomas had uttered since February 22, 2006.

The meaning of the remark is unclear, and it’s not known what Clarence Thomas was referencing. According to CBS News, the remark was unrelated to the case the court was hearing at the time.

The Supreme Court Justice told Business Week last year that he didn’t feel the need to say anything in his courtroom. “I don’t feel any pressure,” Clarence Thomas said. “When I have something to say, I’ll say it.”

“A white person is free to think whatever they want to think, but a black person has to think a certain way,” he told Diane Brady of Business Week in 2007. “Why do you think I get in so much controversy? People have a model of what they think a black person should think.”

Thomas has previously justified his silence in public, mentioning that he prefers to sit back and listen to a case rather than bombard lawyers with questions. In a conversation with CBS reporter Jan Crawford, Thomas likened the Supreme Court environment to that of the “Family Feud” game show and chided his fellow Justices for talking too much. Thomas said he takes a different approach, opting to express his opinion through written words, as he often does with his powerful dissents.

Clarence Thomas maintains that shyness was not a factor in his silence. “Justice Marshall rarely asked questions. Justice Powell rarely asked questions. That’s a personal preference. I certainly wouldn’t do it to provide histrionics for the media gallery or for other people or for critics,” Justice Thomas said on 60 Minutes in 2007. “Critics will always be critics,” he added.