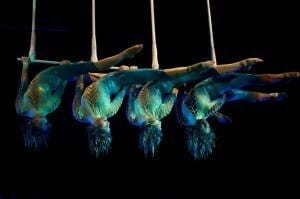 Cirque du Soleil is spectacular to watch. The choreography leaves you breathless. The production stuns your senses. The acrobatics fill you with awe. And I haven’t even seen it performed in a venue as incredible as MGM Grand in Las Vegas.

But Saturday’s audience didn’t leave gushing about the performance. It wasn’t the mind-boggling aerial perfection that many have come to expect from Cirque du Soleil.

The performance of “Ka” ended abruptly Saturday night after a performer fell more than 50 feet into a pit below the stage. Sarah Guyard-Guillot, known as Sassoon, 31, was pronounced dead just before midnight. She was the first death from an onstage accident in the show’s 30 year history.

Guyard-Guillot was suspended from a wire during the show’s final scene. Audience members initially thought her fall was part of the Cirque du Soleil performance.

“Initially, a lot of people in the audience thought it was part of the choreographed fight. But you could hear screaming, then groaning, and we could hear a female artist crying from the stage,” Dan Mosqueda, who was attending the show with his family.

Guyard-Guillot had been an acrobatic performer for 22 years. She left behind two young children.

“I am heartbroken. I wish to extend my sincerest sympathies to the family.  We are all completely devastated with this news,” Laliberte said.  “Sassoon was an artist with the original cast of KÀ since 2006 and has been an integral part of our Cirque du Soleil tight family. We are reminded, with great humility and respect, how extraordinary our artists are each and every night.”

Future performances of “Ka” have been suspended indefinitely.