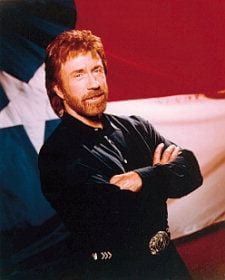 To Chuck Norris, 4 more years of Obama would be worse than a roundhouse kick to the face

Chuck Norris wants you to understand that if President Obama is re-elected, America is in for a world of pain. That’s why he and his wife, Gena, chose to make a two-minute ad against the incumbent.

The video, which Chuck Norris posted to his official YouTube channel, takes place in an apparent karate studio and urges evangelical Christian Americans to vote this November. The couple warns of a “tipping point” after which America will never be the same and freedom will be in jeopardy.

“Let’s unite for God and country,” Chuck Norris urges in the video. Gena Norris chimes in with the statistic that 30 million evangelical Christians didn’t vote in the last election.

Although the ad doesn’t actually mention Mitt Romney, it doesn’t have to. Besides the obvious (if not Obama, then Romney), Gena and Chuck Norris spend much of the two minutes quoting Ronald Reagan’s speech in support of Barry Goldwater in 1964, called the “A Time for Choosing” speech. In it, Reagan warned of “1,000 years of darkness” for future generations and said that “freedom is never more than a generation away from extinction.”

Chuck Norris originally supported Newt Gingrich in the 2012 presidential race. Back in May, when Newt Gingrich dropped out and Norris voiced his support for Romney instead, Norris wrote an article warning against “four more years of increased socialistic decisions,” a warning that he re-emphasized in the video.

“We can no longer sit quietly … and watch our country go the way of socialism,” Chuck Norris says, “or something much worse.”