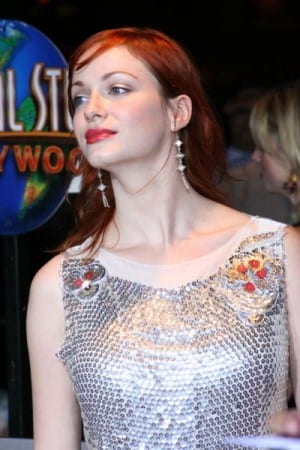 Faux photos of the Mad Men starlet hit the internet

Christina Hendricks has become the most recent victim of phone hacking. Photos, featuring the “Mad Men” starlet in very little clothing, have been circling the internet. Though, a phony photo of Christina Hendricks appearing top-less has also been making its rounds.

Hendricks’ rep told E! News, “Christina’s phone was in fact hacked and photos were stolen. The proper authorities have been contacted in hopes of rectifying this situation. The topless image is fake and not an image of Christina.”

“I’ve learned a little bit from her. I like to sort of be ‘put together’. I’ve actually been a fan of being a bit more covered up than Joan I’ve always believed that’s a very sophisticated and sexy look. I have certainly learned silhouettes from Joan,” she stated to British magazine “Hello.”

Christina Hendricks’ character Joan Holloway is best known for her ample cleavage and form-fitting dresses on the AMC show, which is to return March 25 for it’s fifth season.