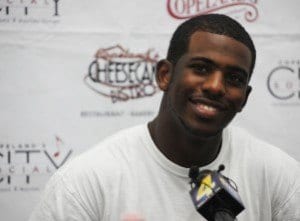 Chris Paul’s agent has said that Paul wants to be in the “Big Apple.”

Chris Paul’s agent has announced that Paul will not be signing a contract extension with New Orleans and wants to be traded to the New York Knicks.

The Hornets general manager Dell Demps wants to officially meet with Paul and hear this from Paul himself. Alleged, the desire to join the Knicks stemmed from spending so much time in New York over the summer with friend, Carmelo Anthony.

It looks as though the trade might be slightly far-fetched, because the Knicks doesn’t have the trade assets to meet with New Orleans’ criteria for a successful deal. Demps has been preparing for Paul not renewing his contract. The Hornets won’t let Paul walk away at the season’s end without trying to receive the maximum value for him.

Though the Hornets aren’t expecting to receive a point guard in return for Paul, it is rumored they might be playing Jarrett Jack as a starter for the rest of the season.

If Paul decides to opt out of his final year and become a free agent, he could potentially sign a maximum four year $74 million deal with another team. The Knicks have a salary cap room to offer him a four year, $55.5 million contract.