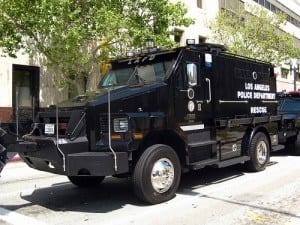 It looks like Chris Dorner, former LAPD officer and accused cop killer, has joined the list of crazies who just can’t resist the urge to publish their deepest, creepiest thoughts in manifesto form.

Chris Dorner is accused of killing one cop and two civilians, in a rampage that began Sunday, injuring two more officers along the way.  A former Los Angeles policeman and Navy reservist, Dorner posted an 11,000 word manifesto to his Facebook page before embarking on the rampage.  He blamed the LAPD for wrongfully firing him and promised to seek revenge on those responsible for his anguish.

After first trying to steal a boat at a yacht club near San Diego and escape to Mexico, he abandoned the attempted theft after the propeller of the yacht got stuck in rope.  Police believe he then headed to Riverside, where he allegedly shot two police officers.

“[This is an] extremely tense situation,” Lopez said to an ABC News Reporter. “We call this a manhunt. We approach it cautiously because of the propensity of what has already happened.”

Dorner is accused of shooting two officers who were sitting in their patrol car at a red light.  He allegedly used a rifle to fire through their windshield, killing one officer and injuring the other.  The injured officer is expected to make a full recovery.

Police say Dorner shot at four officers overnight and hit three of them, one in Corona, Calif. and the two in Riverside.  In the manifesto published online, Dorner names 12 individuals, along wit their families.  The LAPD says that it has deployed 40 protective details to protect named officers and their families.

The LAPD is using the manifesto posted to Facebook to predict some of Dorner’s next moves.  Dorner claims local law enforcement will have difficulty tracking him down because of his familiarity with police tactics.

“The person we suspect of doing this is mobile, and with California’s interstate highway system, every hour that goes by that’s another 60 or 70 or 80 miles or greater circumference, it is a very wide net,” Chief of Police Sergio Diaz of the Riverside police department said to ABC News.