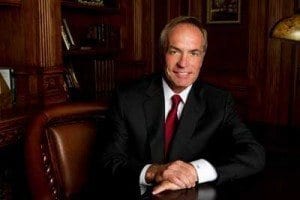 Who is Chris Cline?

Cline is the new love interest of Elin Nordegren, Tiger Woods’s ex-wife. Cline has about $1.2 billion to his name and is the owner of Foresight Energy, a coal company that produces 20 million tons of coal a year.

Cline is 53 years old, and Nordegren is 33. The two both own homes in North Palm Beach, Fla. and have been dating since the holidays, reportedly.

Two months ago, the National Enquirer reported that Woods was attempting to win Nordegren back following his streak of infidelity from a few years ago by offering her a $200 million prenuptial agreement.

Woods did not comment on the reports. The couple was married for almost six years and divorced in August 2010. They have two children together.

Cline has been married twice and has four children. His first wife died of breast cancer in 1987, and he divorced his second wife in 2000.

There was some speculation that Nordegren and Woods were getting back together after being seen together last month at a youth sporting event with their children, which is now debunked.

Cline has stayed out of headlines, but he was recognized in September when he hosted a fundraiser for then-presidential candidate Mitt Romney at his home. Cline also occasionally hosts parties on his 164-foot yacht.

Before starting her relationship with Cline, Nordegren reportedly had relationships with businessman Jamie Dingman and Swedish hockey player Douglas Murray.

Woods reportedly has a relationship with U.S. Olympic skier Lindsey Vonn, though not exclusively.