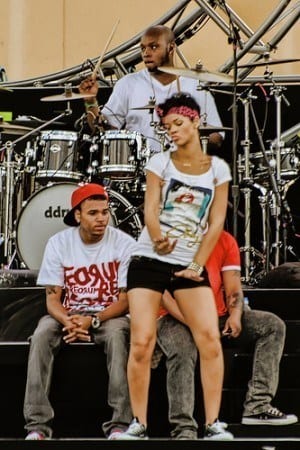 Chris Brown and Rihanna, notorious for their breakup in 2009, have been spotted together again at a Jay-Z concert in Brooklyn on Wednesday. Rap Radar editor Elliott Wilson tweeted a photo of the pair sitting next to each other at the VIP area of Barclays Center in Brooklyn. Brown had his arm around the chair of Rihanna. This celebrity sighting was also confirmed by other concertgoers as well. They were also spotted earlier that evening leaving the Manhattan Gansevoort Hotel

These reports come just a day after the duo were allegedly caught making out at a Manhattan nightclub. An eyewitness reported that the two were dancing and kissing. Brown’s current girlfriend, Karrueche Tran, wasn’t psyched about the news and tweeted Wednesday night “Bye, baby.” The Daily News also noted that Brown and his girlfriend of almost two years “have been fighting nonstop lately.” Wonder why?

Chris Brown is still on probation for his infamous physical assault of Rihanna in 2009 while the pair were fighting in a car. Brown’s probation failed to be revoked by a judge after he recently tested positive for marijuana.

Will the famous pair get back together? Despite Brown’s attractive track record of being arrested for assault, probation violations and testing positive for marijuana, Rihanna admitted in an interview with Oprah Winfrey that she still loves him.