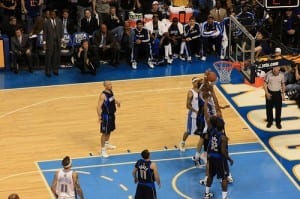 Chris Andersen of the Denver Nuggets has been excused indefinitely from all his team-related activities after a search was done on his home.

Chris “Birdman” Andersen is under investigation by the sheriff’s department Internet Crimes Against Children unit. It has been confirmed that property of Chris Andersen had been removed from his house but nothing specific has been confirmed.

“Sheriff’s spokesman Ron Hanavan confirmed that the search took place Thursday. Andersen has not been arrested and Hanavan said no arrest warrant has been issued. The department began investigating Andersen in February after receiving information from a law enforcement agency in California. Hanavan declined to release details, including the nature of any pending charges, citing an ongoing investigation. He said they’re asking that the case be sealed. Andersen answered the door at his Larkspur, Colo., home, about 40 miles south of Denver, and let deputies in, said Deborah Sherman, another sheriff’s spokesperson. ‘He did cooperate. He spoke with deputies,’ Sherman said. The unit investigating Andersen investigates child porn, Internet luring, child predator and child pornography.”

Chris Andersen did not play in Game 6 against the Los Angeles Lakers, but he hasn’t had much playing time this season anyway.

Nuggets coach George Karl said on Thursday before the game, “For me right now, I think I’m at a stage where I don’t know enough information. I think we all were advised probably not to talk about it until we know the information. The only thing I will say is I trust Chris. In my years with him, he’s been fantastic. I think he’s really grown as a person. We’re going to support him and stand by him.”

Previous ArticleJ.P. Morgan's $2 billion loss due to risky investmentsNext ArticleOldest Mayan calender discovered, end of the world not in our lifetime