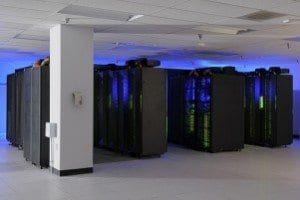 This supercomputer is fast. Way fast.

China has created a supercomputer that tops the list as the fastest in the world, according to the June 2013 TOP500. This biannual list ranks the most powerful computer systems in the world, and China has not had a system at No. 1 since 2010, when it released the Tianhe-1A.

The Tianhe-2 has now pushed the United States’ Titan to No. 2. It has a peak performance speed of 54.9 quadrillion operations per second, according to the National University of Defence Technology. It is able to execute 33.86 petaflops, which is almost twice that of Titan.

For those of you who don’t speak computer lingo: this computer is fast. We’re talking hundreds of thousands of times faster than your computer at home. This supercomputer can make fast calculations with huge amounts of data that your computer couldn’t even begin to process.

Despite China’s sudden leap to the top, the United States still holds 253 of the 500 systems on the list (with five sitting in the top 10), while China only holds 65 systems.

“Ranking is not so important,” said Li Nan, spokesman of the Tianhe-2 project. We are producing supercomputers with a fundamental purpose of providing a driving force for the construction of an innovation-oriented country and solutions to sciences that concern the future development of human beings.”

And it’s true, the ranking isn’t that important. China still has something else to be proud of: a locally produced machine. “Most of the features of the system were developed in China, and they are only using Intel for the main compute part,” said TOP500 editor Jack Dongarra, who has visited the site of the Tianhe-2. “The interconnect, operating system, front-end processors and software are mainly Chinese.”

By keeping the production within its own country, the production will benefit China’s science and industries, as well as provide a sound infrastructure for the growing global demands of big data processing.

It is now believed that China has been working on the development of its own chip technology, which would ensure it plays an important role in the world’s high-performance computing (HPC).

China’s $100 million supercomputer will be deployed at the National Supercomputer Centre in Guangzho, China, later this year, a full two years ahead of its expected release date. It is going to be offered as a “research and education” resource for Southern China.

The United States is not expected to release another supercomputer until 2015.