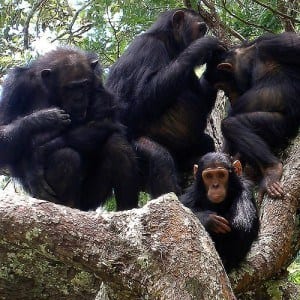 Film follows the life of newborn chimp for four years

Chimpanzee, the new nature documentary from Disney, has been receiving wonderful reviews.

Chimpanzee is a documentary that follows a toddler chimp, Oscar, in the adventure that is his life. Living in the African jungle hands Oscar and his family good days and bad, and although Disney is famous for anthropomorphizing animals, the natural behavior of these chimps is so close that of humans, it’s hard to ignore the fact that they share 99 percent of their genetic material with us. NJ.com wrote about Chimpanzee, “It’s wrong, scientists often tell us, to look for human emotions in beasts. Yet feelings—fear, anger, concern—are everywhere here. Ingenuity, too, as the chimps use tools to crack nuts. And coldness, as well, as they hunt small monkeys for food.”

Chimpanzee is narrated by the tool man himself, Tim Allen, who tells Oscar’s family’s story. The film was about four years in the making and lasts about 80 minutes. Chimpanzee shows the chimp’s daily lives and explains their behavior, like how they groom each other has a way to strengthen bonds. The Huffington Post wrote about the main character of the documentary, “Oscar is as camera-ready a hero as you’re likely to find – unless there’s another baby chimp available. He plays with his mother Isha, bugs the adults and copies the actions of his elders in the brood. He also hides for his life whenever Freddy’s family must defend its territory from encroachment by another chimp tribe led by a male named Scar.”

The Huffington Post also wrote, “The cinematography gives you amazing access to the day-to-day lives of these very human animals. It maybe the most personal and involving nature doc since March of the Penguins.”