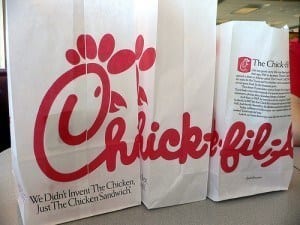 Chick-fil-A counter-protest to be held Wednesday

Chick-fil-A will hold an event celebrating straight marriage on Aug. 1st. Rick Santorum is one of the event’s main supporters. And the Chick-fil-A kid’s meal toy has been recalled.

Santorum said, “No signs and no protests are needed to make your voice heard.  Just simply have a meal at Chick-fil-A on Aug. 1st for ‘Chick-fil-A Appreciation Day’ and our support for traditional values will be heard loud and clear.”

Aug. 1st will play the role of Santorum’s counter-protest, to be assisted by Mike Huckabee.

And according to Los Angeles Times, Chick-fil-A has been closed on Sundays in the past, for church.

One of the organizations against Chick-fil-A’s stance on gay marriage, the Jim Henson Creature Shop, is the main kid’s meal toy provider for the restaurant. But the down-home Southern sandwich joint momentarily recalled the kid’s toy only a day after learning of Jim Henson’s opposition toward Chick-fil-A’s stance.

Epicurious.com contributor Michael Y. Park expressed suspicion about the page’s newness, and about the stock profile photo. Chick-fil-A allegedly had nothing to do with the Facebook profile.

According to The Huffington Post, the Jim Henson toy recall is nationwide and is allegedly unrelated from opposing remarks to Chick-fil-A.

President Dan Kathy of Chick-fil-A said in an interview, “We are very much supportive of the family — the biblical definition of the family unit. We are a family-owned business, a family-led business, and we are married to our first wives. We give God thanks for that.”