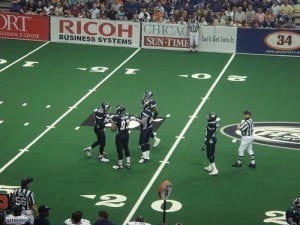 The Chicago Tribune reports that the Chicago Rush announced on Wednesday that it is offering Terrell Owens a contract for 2012. The Rush is an arena football team.

“We feel that this is an ideal time to approach the future NFL Hall of Famer,” Chicago Rush GM and president Gene Nudo said. “It would be a fantastic honor to add Terrell to our current roster for the 2012 season.”

The announcement has led to people making jokes on Twitter, but Owens, so far, has neither accepted nor declined the Rush’s offer.