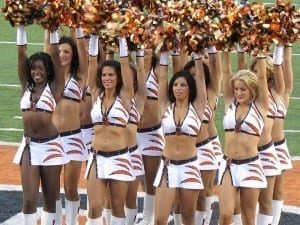 Her mother pleads not guilty to tampering with evidence

A former Bengals Cheerleader, Sarah Jones, accused of first degree sexual abuse and her mother, a middle school principal accused of tampering with evidence, entered pleas of not guilty today.

Cheerleader Sarah Jones was the once captain of the Cincinnati Bengals Ben-Gals cheerleading squad and a former high school teacher, was accused of sexual abuse and unlawful use of electronic means to induce a minor to engage in sexual activities.

Sarah Jones’ husband and Jones are seeking to annul their marriage of nine months and currently do not live together. When asked about the allegations against Jones, husband Nathan Wilburn responded, “To be honest with you, I don’t want to talk about her.”

Cheerleader Sarah Jones’ mother, 55-year-old Cheryl Jones, pled not guilty in connection to her daughter’s case of tampering with evidence. Cheryl Jones is currently on suspension for her job as a middle school principal until authorities complete their investigation.

With both of the Jones’ involved with the school district, the current superintendent of Kenton Count, Terry Cox-Cruey told WCPO that they were closely monitoring the situation and that, “We all want our students to be safe.”

“Sarah has maintained her innocence,” Charles T. Lester, the lawyer for both Sarah and Cheryl Jones, released the statement. “The indictment of her mother is completely baseless. Cheryl Jones did not tamper with evidence.”