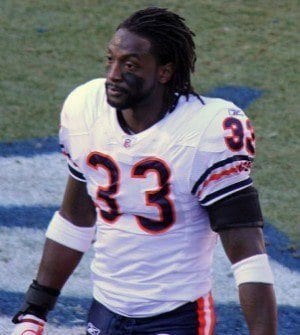 Charles Tillman, Chicago Bears cornerback, might miss Sunday night’s match-up with the Houston Texans due to the birth of his child. Tillman’s wife, Jackie, is due with their fourth child and is said to give birth any day. Should she go into labor on game day, Tillman said, “I think I’m going to have to be at the hospital Sunday.”

Tillman’s teammates are in full support of his decision to be with his wife that day. Wide receiver Brandon Marshall told the Chicago Sun Times, “It’s take care of your family. We understand how things are run around here. This is a special group. Coach (Lovie) Smith is a special guy, definitely in how he runs things, and—you take on the character of your leader. That’s what he preaches—family comes first.”

Tillman wholeheartedly agrees with Lovie’s philosophy. Tillman said, “At the end of the day, (family is) all that you have. This game is important to me, but after what we went through with my middle child, Tiana, (who was diagnosed with a  rare heart disease), to me football is second. It’ll always be second or third in my life. That was a great lesson learned, to teach me that family—when I’m done playing football—my family will always be there for me.”

Should his wife give birth early Sunday morning, Tillman said he would be at the game later that night.

Charles Tillman has not disappointed his teammates or Chicago Bears fans this season. He has 43 tackles, six passes defensed, two interceptions (both of which were returned for touchdowns) and seven forced fumbles this season.

The Chicago Bear’s record stands at 7-1.