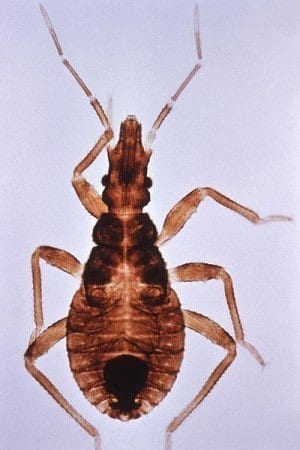 Chagas disease is a low profile disease transmitted to people from bugs. The bugs in question are termed as “kissing bugs.” The kissing bug carries a parasite called Trypanosoma cruzi, which leaks into the blood stream and causes the Chagas disease.

The main effect of Chagas disease is damage to the heart, intestines and esophagus and can ultimately lead to death. A major consequence of the disease is explosion of the heart. And the disease can go unnoticed for decades, according to PLoS Neglected Tropical Diseases.

The most noticeable symptoms of the Chagas disease are severe abdominal pain, constipation and digestive problems, but Chagas disease symptoms do not surface until the disease has become severe. These symptoms slowly follow dormant symptoms like a swelling eye, a fever and simply not feeling well.

According to PLoS, about 10 million people are currently living with Chagas disease, and about 20,000 people are killed each year by the disease.

The spread of Chagas disease has been caused by an increase in travel and immigration, since most U.S. Chagas disease cases are found in immigrants and others in impoverished areas.

The Centers for Disease Control and Prevention target a group of five main parasites, including the Triatomid, or “kissing bug”, and consider these the Neglected Parasitic Infections.

Experts entitle Chagas disease as the new “HIV/AIDS of America.” Dr. Peter Hotez, dean of the National School of Tropical Medicine at Baylor College of Medicine in Houston, said, “Can you imagine having 300,000 people in the suburbs with a serious case of heart disease caused by a bug? We wouldn’t tolerate it as a society, but because it’s happening to an indigenous people we’re silent.”

Another ailment caused by the kissing bug’s relative, is called Sleeping Sickness where the brain swells by an infestation of the Tsetse fly.

Treatments are too costly in poorer areas where Chagas disease is found, and their treatment supply is low.

Charles Darwin’s death was linked to his travels across the world, during which he visited South Africa and a “wingless black bug” bit him, his father w. It was not until 47 years later that Darwin died of heart failure, a gradual successor of Chagas disease.