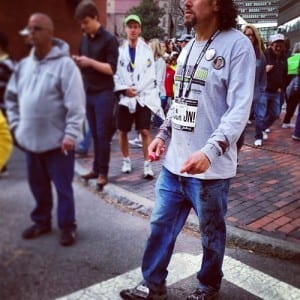 Carlos Arredondo is being proclaimed a hero for his reaction to the Boston Marathon bombings.

Arredondo attended the Boston Marathon as a spectator. He had with him a camera and an American flag. Though many citizens ran to the destruction, instead of away from it, looking to help the injured, Arredondo became the face of this heroism.

He was pictured in a news photo, pushing an injured man down the street in a wheelchair. Arredondo had come to the race to cheer on a group of military service members marching the race with rucksacks on to honor fallen soldiers. One of the members was marching for Alex Arredondo, Carlos’ son, killed in Iraq in 2004.

After Arredondo heard on his son’s death in 2004, he set himself on fire inside a Marines’ van. Years after that incident, his other son committed suicide.

He is no stranger to grief.

Arredondo worked to help one man in particular after the Boston Marathon bombings. The man had bone only beneath his knee caps. As another bystander helped to tourniquet the leg, Arredondo talked to the victim and attempted to block his view of his own leg. He told him it would be alright and that an ambulance was on the way.

Arredondo got the injured man to an ambulance on a wheelchair, but afterward, he could not remember the man’s name. Later, the Associated Press reported that the man’s name was Jeff Bauman Jr., 27, and lost both legs.

Arredondo explained his reaction as a necessity. He said he had to get out of the shock, and his way of doing that was to help others. Other bystanders who ran to the smoke instead of from of it explained their reactions in a similar way.