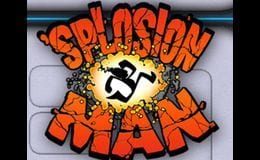 In addition to the similar sounding name, Capcom’s iDevice game borrows much of the same gameplay mechanics from Twisted Pixel’s 2009 release, including “the ability to explode at will allowing you to bounce off surfaces and reach far flung locations.” Beyond that, MaXplosion’s bouncy soundtrack evokes similar moods, and the main character Max maniacally utters the same kind of hyper, nonsensical sounds as he jumps and explodes. Even some of the futuristic level design, right down to the towering walls, is eerily reminiscent of ‘Splosion Man.

Is this the overreaction of a passionate developer or a very legitimate complaint? After all, Rolando borrowed liberally from Sony’s Loco Roco. The entire App Store landscape is littered with imitation and plagiarism, both unintentional and deliberate.

They do say imitation is the sincerest form of flattery, but could spite be a motivating factor? According to a tweet from Twisted Pixel CEO Michael Wilford, the developers actually pitched ‘Splosion Man to Capcom and were rejected. We wanted to dig deeper, so we contacted Mr. Wilford directly and were pleased to get this response:

“We pitched Splosion Man to Capcom USA in 2008.  They were looking for new concepts for downloadable console, but ‘Splosion Man wasn’t quite what they were looking for at that time so they passed.  The guys we talked to over there are good dudes that were doing some great things at Capcom, but they were smart and got out of there before things started turning really sour so I’m sure they had nothing to do with MaXplosion. If I had to guess, I think Capcom Europe just came to their own conclusion that it was a good idea to clone ‘Splosion Man.”

Surely Capcom could – and should – have a lot to answer for. The popular opinion (and surely the law) must favor Twisted Pixel given the circumstances, right? Amusingly, the answer is no. Copyright and patent law — relatively infantile in the realm of video games — actually does not protect ideas, nor does it protect game mechanics. If it did, the landscape of this industry we dig could be strikingly different. Imagine if early game developers had patented and protected things like the double jump or the regenerating shield. It would be a world devoid of variety, iteration and innovation. Copyright law protects the blatant theft of, say, game programming code or specific characters, meaning that although Capcom Europe may have done something a bit unethical, it wasn’t illegal.

That being said, we couldn’t help but laugh at Wilford’s final comment in our email discussion:

“If they want to apologize by letting us make ‘Mega Mang’ or ‘Super Alley Fighter IV Turbo’, I’d take that.”

Compare the MaXplosion gameplay video below with the ‘Splosion Man trailer and judge for yourself. Does copyright law need to be tweaked to prevent things like this from happening? Sound off in the comments.