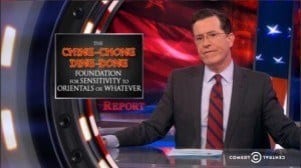 Last night a myriad of Twitter denizens took to the data-sphere and demanded to “Cancel Colbert.” The trending topic came on the heels of a tweet from the @ColbertReport account saying “I am willing to show #Asian community I care by introducing the Ching-Chong Ding-Dong Foundation for Sensitivity to Orientals or Whatever.” In response, #CancelColbert became a trending topic.

Cancel Colbert tweets then took over the Twitter-verse, with accusations of racism being thrown Stephen Colbert’s way. The controversial tweet in question was an out-of-context quote from Wednesday’s night’s episode of The Colbert Report. Colbert poked fun at Washington Redskins owner Dan Snyder and his new charity “The Washington Redskins Original American Foundation,” created to sway racist connotations from the team’s name.

Colbert’s “Ching-Chong Ding-Dong” bit is a long-running joke on the show which tackles racial stereotypes with satire. (Side note: According to the dictionary, satire is “the use of irony, sarcasm, ridicule, or the like, in exposing, denouncing, or deriding vice, folly, etc.” You know, what The Colbert Report does every episode.)

Regardless of its satirical intentions, the tweet that has enraged so many Tweetizens has since been removed by @ColbertReport. The account is not controlled by Colbert himself – no surprise there – but by Comedy Central, who stated “For the record @ColbertReport is not controlled by Stephen Colbert or his show. He is @StephenAtHome Sorry for the confusion … This is a Comedy Central account, with no oversight from Stephen/show.”

Stephen Colbert himself addressed the entire kerfuffle via his personal Twitter, saying “#CancelColbert – I agree! Just saw @ColbertReport tweet. I share your rage. Who is that, though? I’m @StephenAtHome.”

So all in all it sounds like this whole “Cancel Colbert” mess was a case of bad micromanaging on Comedy Central’s part. The takeaway for them should be “Funny sound bite does not always equal successful tweet.” You’ll learn Comedy Central, you’ll learn.

Also it’s probably a safe bet that the next episode of The Colbert Report will address the whole thing in a wonderfully-humorous and not at all apologetic manner.

You can check out the segment featured on last night’s Colbert Report, HERE around 4:45

[easy-social-share buttons="facebook,twitter,google,linkedin,stumbleupon,pinterest" counters=0 hide_names="force" fixedwidth="yes" fixedwidth_px="111"]
Previous ArticleTake gaming to the next level with BenQ's XL2420TE Gaming MonitorNext ArticleThe Firefly might be the most luxurious portable vaporizer on the market