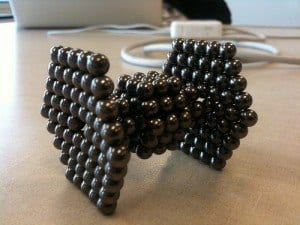 A 3-year-old Portland girl recovered yesterday after she swallowed and had 37 Buckyballs magnets removed from her intestines.

Payton Bushnell was complaining of flu-like symptoms on Feb. 21, so her mother took her to the doctor. X-rays showed -and to everyone’s disbelief- that the toddler had a cluster of metal balls lodged in her stomach. She is said to have finally recovered yesterday after being in the hospital she she was initially admitted in February.

Buckyballs Magnets have a hazardous warning on product labels and on their website, “Hazard: The high powered magnets sets were labeled “Ages 13+” and do not meet the mandatory toy standard F963-08, (effective August 17, 2009) which requires that such powerful magnets are not sold for children under 14-years-old. Magnets found by young children can be swallowed or aspirated. If more than one magnet is swallowed, the magnets can attract each other and cause intestinal perforations or blockages, which can be fatal.”

The website even reported of two children swallowing one or two magnets but did not incur injury. Looks like that will have to be revised now that Payton Bushnell got her hands on the toys.

In the past, one child has died and 19 others have been injured from similar toys with magnets in them. This led to the recall of 4 million toys by the Consumer Product Safety Commission. Buckyballs are, “intended to build unlimited shapes and patterns,” and avoided the recall.

The Buckyballs Company issued a formal statement about Payton Bushnell’s recent incident, “Buckyballs was saddened to learn that a 3-year old girl in Oregon had swallowed high-powered magnets, but we are relieved that she is expected to make a full recovery. This unfortunate incident underscores the fact that Buckyballs and Buckycubes are for adults. They are not toys and are not intended for children. We urge all consumers to read and comply with the warnings we place on all our products, on our website and in stores. Please keep these products out of the hands and reach of all children.”