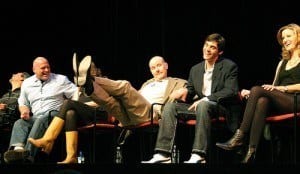 Bryan Cranston might be keeping his signature bald head via his hit show Breaking Bad for a lot longer because there are many rumors a float that he will be taking the roll of follicle-challenged super villain, Lex Luthor in the upcoming Man of Steel sequel.

This news has circulated the web the past couple of days, even getting to Rolling Stone, who’s article “Report: Bryan Cranston Cast as Lex Luthor in ‘Man of Steel’”, garnered tons of attention in the blogosphere. Cosmic Book News first broke the story with an article posted on Sunday that gives many specific details on the upcoming Man of Steel deal. The article says that Bryan Cranston would be cast as Lex Luthor in a “six appearance” deal that may even be as high as ten appearances.

Much to many fanboy’s dismay, Ben Affleck has been officially cast as Batman for the same sequel, and Cosmic Book News also reports that he will have a thirteen appearance deal with DC Comics. Twitter’s reaction to the casting was mostly negative with celebrities weighing in on the decision. Actor Wil Wheaton questioned Ben’s past acting roles by tweeting out “Really looking forward to seeing Affleck bring the depth and gravitas to Batman that he brought to Daredevil and Gigli.” Comedy Central weighed in tweeting “Casting Ben Affleck as Batman sounds like something the joker would do to create a distraction at the nerd bank.”

Henry Cavill who portrayed Superman in the first Man of Steel, will continue to play the extra terrestrial super hero in the sequel.

Although there is much excitement a float with this current announcement, many other websites are calling BS on the rumor. Mike Sampson at Screen Crush wrote an article debunking the rumor where he says “As far as we know, there haven’t been any talks between the sides other than Cranston jokingly telling a reporter, ‘Give me a call, I like Lex Luthor.’ All that there is that Bryan Cranston shaved his head for Breaking Bad and Lex Luthor is also bad.”

Another actor that has been in talks to play Lex Luthor is Mark Strong who has a lot of practice in the art of villainy. Appearances in comic book adapted films such as Kick Ass and Green Lantern make him super qualified for the job. Comic Book News suspects the official announcement of the Bryan Cranston casting will come on the heels of the series finale of Breaking Bad.