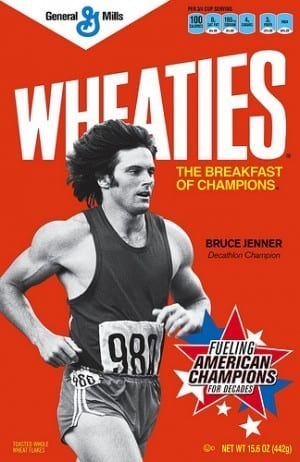 Bruce Jenner, the fill-in patriarch of the Kardashian family, thinks that Kanye West needs to get his love locked down.

On May 31 Bruce Jenner was interviewed by Extra, accompanied by his still totally relevant son Brody. The appearance was in promotion for last night’s premiere of E!’s experimental western noir Keeping Up with the Kardashians, which is entering its eighth season.

Bruce Jenner, Olympian and facial reconstruction guinea pig, was engaged in a tête-à-tête of conversation fluff with human dolphin Maria Menounos. When Menounos asked Jenner about Kim Kardashian’s baby-daddy beau Kanye West however, he didn’t really have much to say about the self-proclaimed “God of Rap.”

Bruce Jenner said that “He’s not around! He’s in Paris the whole time writing, he just hasn’t been around.” This resulted in a porpoise gasp provided by the seasoned journalist Menounos.

The whole discussion of Kanye West’s nonexistence in the pregnant Kardashian’s life was ironically preceded by another absent father tale. Brody Jenner opened up about his stint on Keeping Up with the Kardashians, saying:

“Over the years as I was a kid, I hate to say it, but Bruce wasn’t around all the time, he was sometimes, but we started hanging out and developing a relationship, and his whole life is on television.”

There’s so much father/son turmoil and emotion going on here that Oedipus himself would weep! If only Extra had appropriately scored the affair with Cat’s in the Cradle. Maybe in the sequel.

Will Bruce Jenner reacquaint himself with his son?  Does Brody Jenner realize that he’s not starring in a spin-off to The Hills? And most importantly, will Bruce Jenner make nice with Kanye West and potentially appear in a music video sporting a sequined leather jacket whilst holding a white tiger on a leash?

Find out next time on Keeping Up with the Kardashians! (Sundays at 9 EST)

You should read: Brothels, sex, Kardashian and Lamar Odom