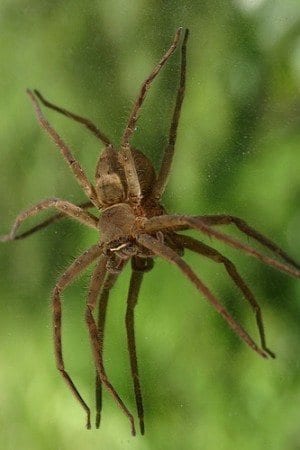 A brown recluse spider bit 21-year-old Nikki Perez on the back of the neck while she was at Amarillo airport in Texas last September.  The Daily Mail reported that Perez needed to be hospitalized for five days to counter the effects of the bite.  The brown recluse spider almost caused Perez to loose her ear from necrosis; the student required a skin graft to repair her rotting ear. She also suffered swelling of the face and head- and at times was not able to see because the bite had caused one of her eyes to swell shut.

The brown recluse spider bite was documented by Perez, as doctors initially told her to wait to see what would happen. The Daily Mail shows the progression of the symptoms of the bite including the advancement of rot on her ear and her head swelling to almost twice its normal size.  After she lost sight in one of her eyes due to the swelling, Perez said, “Then it started spreading to my other eye. I was going blind…it was terrifying.  It was spreading all over my head, which actually felt like a bit of a relief as the pain was so concentrated behind my ear.”

The brown recluse spider that put Perez in agonizing pain for over a week has been rumored to be rapidly spreading around the country due to global warming. Reports of brown recluse spider bites have surfaced all over the country, but Rick Vetter, the expert on the brown recluse spider, say it’s just media hype and scare tactics.  Vetter claims a bite from the loxosceles reclusa most often only causes a red mark and says doctors are blaming the spider bites for other, more serious, diseases that are causing symptoms like necrosis. MRSA, diabetes and lymphoma all cause necrosis and Vetter believes the “stupidity in the medical community” is causing the majority of brown recluse spider bites to be misdiagnosed. ABC reported, “Vetter was so tired of doctors blaming the much-maligned spider, he started the Brown Recluse Challenge. Of 1,800 specimens sent to him, only 350 turned out to be the real deal. And all were from the Midwest.”

The brown recluse spider bite is rarely life threatening, only in 10 percent of cases, and Vetter says the bite only causes one or two deaths a year.