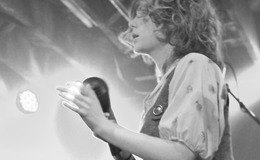 Tipitina’s, a large venue in Uptown, New Orleans, was packed full of fans from the balcony to the standing room floor, anxiously waiting to see Broken Social Scene.

The two-hour concert flew by and was actually a little difficult to keep up with as the talented band members continued to alternate on and off the stage. The show was engaging and interactive as Drew gave fans the option of a magical encore, marked by fans favorites from the past and present and Kevin Drew’s occasional barricade straddle.

Zeus, also signed to the Arts & Crafts record label, are Broken Social Scene’s current tour-mates. The fellow indie rock Canadian natives provided an energetic, opening set that fueled fan enthusiasm for the headliner. This band’s debut album, Say Us, is currently on sale for $1.99 on Gallery AC’s website – a steal that music fans should take advantage of as quickly as possible.

With only a few dates left in their U.S. tour, a brief conversation with drummer Justin Peroff confirmed that the band will most likely take a break from touring for a while, so catch their last few shows while you still can!