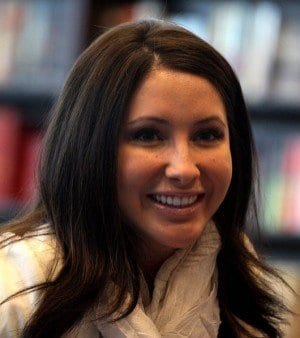 Bristol Palin, the 21-year-old daughter of former governor of Alaska Sarah Palin decided to weigh in on President Obama recently going public with his stance on gay marriage. Bristol Palin wrote “Hail to the Chiefs—Malia and Sasha Obama,” which blames the Obama girls for changing their father’s mind about gay marriage.

Bristol Palin, the unwed mother of three-year-old Tripp, decided to get up on her high horse and give the world her very important opinions on the matter.

President Obama said his stance on gay marriage was one that evolved. He said, “You know, Malia and Sasha, they have friends whose parents are same-sex couples. There have been times where Michelle and I have been sitting around the dinner table and we’re talking about their friends and their parents and Malia and Sasha, it wouldn’t dawn on them that somehow their friends’ parents would be treated differently. It doesn’t make sense to them and, frankly, that’s the kind of thing that prompts a change in perspective.”

Bristol Palin took these comments to mean that the President is asking his daughters about their opinions on policy change, when in reality he was simply shown a new perspective from his children, an observation on his part. “So let me get this straight … it’s a heroic act if the President made a massive change in a policy position that could affect the entire nation after consulting with his teenage daughters?” Bristol Palin wrote.

Bristol Palin continued, “While it’s great to listen to your kids’ ideas, there’s also a time when dads simply need to be dads. In this case, it would’ve been helpful for him to explain to Malia and Sasha that while her friends parents are no doubt lovely people, that’s not a reason to change thousands of years of thinking about marriage. Or that—as great as her friends may be—we know that in general kids do better growing up in a mother/father home. Ideally, fathers help shape their kids’ worldview.”

It gets better. Bristol Palin wrote, “Sometimes dads should lead their family in the right ways of thinking. In this case, it would’ve been nice if the President would’ve been an actual leader and helped shape their thoughts instead of merely reflecting what many teenagers think after one too many episodes of Glee.”

First of all, Bristol Palin, it would be nice to see that evidence you speak of that says children do better in a “mother/father home.” Seeing as her son doesn’t have parents that live together, will he be “worse” because of it? Second off, the idea that marriage hasn’t changed in the past two thousand years is just wrong. Marrying for love is actually a relatively new concept. Marriage used to be a game of class, tying families together and popping out kids; wives and husbands very often had extra marital affairs with one or both sexes—just read any biography of Shakespeare.

It’s always infuriating to watch people claim that the U.S. was founded on Christian values (because it wasn’t) but it’s funny to see when people take the same position as Bristol Palin on an issue that has been compared to the Civil Rights movement. The opposition to the rights of a minority group in the 40s and 50s look ignorant to everyone today, but the opposition to a minority group in the in the 2000s doesn’t look ignorant to at least half the population today. It’s interesting to wonder if our children will look back on the battle of gay marriage and see it in the same light that we see the Civil Rights movement: What kind of idiots were against equal rights?