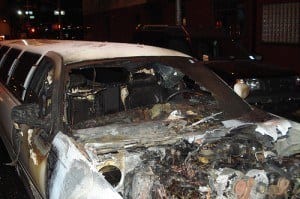 Bride-to-be, Neriza Fojas’ life came to a tragic end Saturday evening when the limo she was riding in burst into flames on San Francisco’s San Mateo Bridge. What was supposed to be a bachelorette celebration turned devastating when the Lincoln Town Car caught fire around 10 p.m. As the limo driver pulled over and other motorists stopped to help, only four of the nine women were able to escape the car.

California Highway Patrol officers found the five victims, including Fojas, surrounding one of the windows in the limo.

“This is one of the most horrific things I’ve seen in 21 years with this office,” San Mateo County’s medical examiner, Robert Foucrault, said Sunday. “Looking at it, they were on top of each other and doing what they could to get out.”

The limo driver, Orville Brown, 46, was nearing the end of the bridge when one of the women alerted him to the smell of smoke. Brown immediately pulled over and tried to help the bride and her friends to safety, but he was unable to help the women in the back of the limo escape the fire. Brown was the only person uninjured.

CHP Officer Art Montiel noted that they are still unsure of what caused the fire, but are urging anyone who witnessed the event to call.

“It wasn’t a traffic collision, but we are still investigating,” Montiel said. “We are asking the public, anyone who saw what happened, to call us. We don’t know if the fire started on the inside or the outside.”

The owner of the limo company, Limo Stop Inc. offered condolences, but declined to comment further on the fire. The medical examiner’s office said the names of the four remaining victims would not be released before Monday. The survivors of the limo fire have been hospitalized in San Jose and are being treated for moderate injuries, including burns and smoke inhalation.