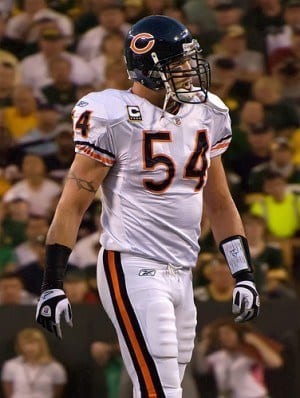 After a stunning career with the Chicago Bears, Brian Urlacher decides to move on

Brian Urlacher, former linebacker for the Chicago Bears, announced his retirement on Wednesday.  This decision came three days before the player’s 35th birthday, and just two months after Urlacher and the Bears split up over a contract dispute.

“After spending a lot of time this spring thinking about my NFL future, I have made a decision to retire,” Brian Urlacher wrote. “Although I could continue playing, I’m not sure I would bring a level of performance or passion that’s up to my standards.”

This statement accurately reflects Urlacher’s most recent seasons with the Bears. The 2011 season ended with Urlacher spraining his MCL, leading to a knee surgery that kept him off the field the entire 2012 preseason. Brian Urlacher was on a limited practice schedule through much of his last season, and a hamstring injury in Week 13 ended his season—and ultimately his career—for good.

Earlier in the spring, the Chicago Bears and Brian Urlacher made an attempt to negotiate a new contract. Despite a mutual desire for another season together, an agreement could not be made. The Bears’ offer of $2 million for one more season was not a sufficient compromise for Urlacher, who demanded a two-year, $11.5 million contract.

While Brian Urlacher was initially angry with the Bears’ handling of the negotiation, he came to terms with the situation and took some time to evaluate his options.  He spent his first two months as a free agent scoping out the field, but the outlook for Urlacher was bleak. “The Bears offered me the contract they offered me and that was probably the best contract I was going to get from anywhere,” he said. “And I’m not going to put my body through what it goes through for what the offer was.”

While Brian Urlacher might be leaving the NFL on a sour note, he hangs up his Bears jersey with pride. “I decided I didn’t want to play for anybody else,” Urlacher told The Dan Patrick Show. “I still have a ton of respect for the Bears. It didn’t work out the way I wanted it to, but I played 13 years for one of the best franchises in NFL history. I’m very proud of that, and I’m happy I won’t have to wear another jersey.”

Urlacher’s incredible career with the Bears included being named NFL defensive rookie of the year after his first season, defensive player of the year for the 2005 season and eight Pro Bowls. His stellar track record has likely already snagged him a spot in the Pro Football Hall of Fame. At nearly 35-years-old, Brian Urlacher is past his prime, and retirement could not have come at a better time. “It’s nice to have it behind me now and go onto the next stage of my life, whatever that may be,” he says. “I thought it was time.”