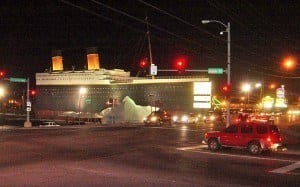 Crews work to rescue those trapped in their homes.

Branson, Missouri was ravaged by a tornado early Wednesday morning.

Branson is a popular country music resort town known for live stage shows. Approximately five of the 50 theaters in Branson, and a dozen of its 200 hotels were damaged by the storm. Many Branson tourist attractions were unharmed by the tornado.

The tornado struck Branson, Missouri around 1:30 a.m. Wednesday. Storms tore across the Midwest Tuesday night and Wednesday morning, with a reported 18 tornado sightings across the region. The storms were triggered when a cold front moved west from the Rockies and met with warm, moist air rising up from the Gulf of Mexico.

Tornadoes are uncommon in February, even in Tornado Alley.  Typically tornado season begins in April, but the unusually warm winter we have experienced this year most likely played a role in the storms.

Because the tornado struck in the middle of the night, residents of Branson had to wait until the sun came up to evaluate the damage that was done to their city. Some people were trapped in their homes, and rescue crews had to wait until sunrise to begin navigating through the debris.

Missouri Governor Jay Nixon has declared a state of emergency in the areas that were hit hardest by the storm.

At least 12 people have died across the Midwest as a result of the tornadoes.