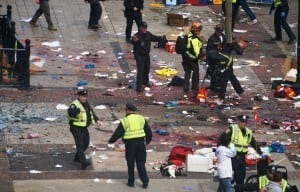 Dzhokhar A. Tsarnaev was found guilty on all 30 counts for his actions during the Boston Marathon Bombing in 2013. The jury took one day and a half to reach a unanimous decision along with 17 days of testimony and evidence.

Tsarnaev was emotionless as his charges were read.

Tsarnaev’s defense attorneys attempted to scrap together a defense by painting Tsarnaev as an unwilling participant who was heavily influenced by his older brother. However they were also clear that the defense would not be denying Tsarnaev’s role in the Boston bombing.

Dzhokhar coordinated the bombing along with his brother Tamerlane, who was killed shortly after the bombing in a gunfight with authorities.

“We don’t deny that Dzhokhar fully participated in the events,” Judy Clarke, Tsarnaev’s defense attorney, said. “But, if not for Tamerlan, it wouldn’t have happened.”

While the charges have been determined, the penalty have not. The same jurors would now decide whether Tsarnaev would die for his crimes or be imprisoned.
Nearly 300 people were injured and three people died that day.

The Tsarnaev brothers placed two pressure cooker bombs at the finish line of the Boston Marathon in 2013 which injured many spectators. He was also found guilty of killing Sean Collier, a police officer in the Massachusetts Institute of Technology, after the FBI found the brothers to be suspects in the bombing.