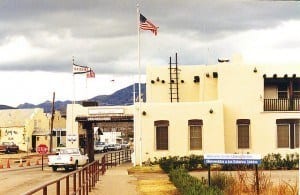 A Border Patrol agent was killed and another was wounded during a shooting early Tuesday morning in Arizona. The agents were on patrol in Naco, Ariz. when deadly gunshots broke out around 2 a.m. The first agent was killed, and the second was shot in the ankle and buttocks and was airlifted to a hospital.

The shooting, although authorities are not sure how or why it happened, was initiated when the Border Patrol agents went to investigate after one of the many sensor alarms located on the border was triggered. Not much is known about what happened between the Border Patrol agents and the attackers during the shooting. Cochise County Sheriff’s spokeswoman Carol Capas said they’re not even sure if the agents returned fire. The FBI is also investigating the shooting and declined to comment on whether guns or bullet casings were found where the incident occurred.

The fatal shooting is the first since the 2010 death of Brian Terry, a Border Patrol agent who was killed during a shooting also near the border. The December 2012 shooting was linked to a government operation investigating gun-smuggling across the border. The government allowed people suspected of illegally buying guns to walk away with the intention of tracking them into Mexico. Instead, two of the illegally bought guns were found at the location of Terry’s shooting. The Border Patrol station in Naco was recently named after Terry in wake of his death.

Twenty six Border Patrol agents have died while on patrol since 2002.

Names of the border patrol agents involved in the shooting have not been released yet. The occurrence took place about 100 miles from Tucson on the desert border of Arizona and Mexico.