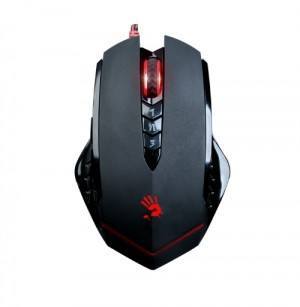 When is added technology too much?

For average PC users a keyboard and mouse are simple tools, used to write emails, click web links, or any of the hundreds of other daily tasks that help the office or the classroom run smoothly. It’s those other users that A4Tech is focusing on with the Headshot V7 gaming mouse, implementing features that will take your gaming to a plateau that you’ve never experienced. With three internal cores, its own memory, special design located at nearly every turn, and software designed to give users an experience that exceeds anything used before it, the biggest question that you’ll find will test your morales: is using this mouse cheating?

Before we address what is arguably the most volatile topic in gaming, the design and features of the mouse are certainly worth discussing. First, beyond the typical left/right buttons and illuminated scroll wheel, the Headshot V7 features two programmable button where your thumb would normally rest, allowing easy access. The benefit to that is, of course, it gives users option from within their favorite game. Those who spend hours within shooters will find grenade options far easier to access at the thumb than a key on the keyboard. That’s due to players typically using their left hand for movements and additional functions, while their right hand is for aiming/shooting. By adding additional buttons to the mouse, players can keep their left hand focused on movement — something that can be the difference between extending a killstreak and waiting for a respawn timer to tick down.

Another interesting design decision is something that you’d typically not even notice. With metal feet instead of plastic, the claim is that the mouse will remain smooth across your gaming surface far longer than a typical mouse. This is because on most other mice the feet are plastic and will wear out after 3 kilometers of use, where the Headshot V7 will last 180 kilometers. These are claims made by A4Tech themselves, but they seem plausible.

The software, available through the Bloody site or via included disk, is interesting in that it offers features that undoubtedly give players a benefit over their competition. The three buttons, 1, N, and 3, allow for alternate firing modes, each recognizable by the glowing light that surrounds the scroll wheel. The ‘1 button’ is the default, setting you to normal firing modes with no added perks. The ‘N button’ changes that slightly, providing auto-cycling shots and “recoil suppression”, allowing for reduced bullet spread and more accurate aiming. Finally, the ‘3 button’ is a three-round burst with recoil suppression, turning your semi-automatic rifles and pistols into deadly burst weapons.

It’s the recoil suppression, among other additions that are cause of concern. The Bloody Headshot V7 teamed up with the Core 3 Software (an additional $20.00 purchase) allows for less bullet drifting when firing and  provides an option for a real-time trajectory adjustment along with macro creation and sharing. This allows creation of communities of players who can modify and share their best setups, ideal for specific weapon modification and custom macros that significantly increase the user’s survivability. The danger is that larger budget games like Call of Duty and Battlefield have systems in place to watch for potential cheating in this exact way. If you don’t maximize and implement all of the options though, you should be fine and can make use of the benefits without risk of being banned.

The overall feel of the mouse is one drawback, especially considering the massive amounts of tech, both hardware and software, that works in tandem with the mouse. The mouse, while not feeling particularly cheap or fragile, is extremely light, offering little bulk in the palm of your hand. For those who play shooters, precision is key and while you’d think that a lighter mouse would be better for that, having something with some heft and a high dots per inch (DPI) is typically considered more comfortable, particularly if the weight is something that can be adjusted.

Overall A4tech delivers a solid piece of equipment with the Bloody Headshot V7 mouse, allowing such high rate of modification that some may frown upon its use. It feels a bit light, but not more-so than a typical consumer-grade mouse. The technology implemented clearly moves this above your basic mouse and provides options that will show an immediate difference in your gaming experience. Even in genres other than shooters you’ll notice a difference, though hardly enough to be considered an advantage, it’s more a benefit. When coupled with Core 3, the V7 becomes a tool not to be trifled with and, should you not want to spend the additional money on the software, still provides enough benefit to justify the extremely reasonable $40.00 cost.