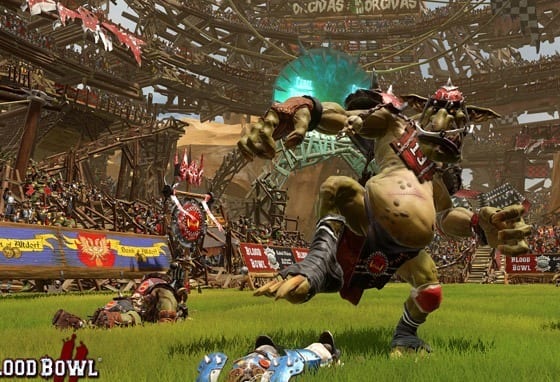 If you’re familiar with Warhammer, you’ve inevitably heard of Blood Bowl, which is why we have Blood Bowl 2 game review. If you’re not familiar with the dark fantasy world, know that it exists in tabletop gaming, novels, and digital games. Out on PC, Xbox One, and Playstation 4, Blood Bowl 2 is a digital interpretation of the tabletop game that resembles football. Though slower and more methodical, requiring a good strategy each time out, Blood Bowl is what you’d get if you crossed the NFL and a butcher shop.

It’s hell. But an entertaining version of it.

You should also read: Free-to-play title Neverwinter hits Xbox One

Like the football you know, teams have 11 players each, but that’s where the rule similarities stop. Blood Bowl 2 is a turn-based contest with each team having eight rounds per half. If you’re on offense, it’s your job to move the ball down the field and score. If you’re on defense, taking the ball is your goal. Regardless of which side you’re on though, carnage and destruction is always at the forefront.

On your turn, you have the option of moving a player or taking an action. An action typically consists of having one of your players throw themselves into an opponent in order to move them around the field. Getting knocked out, injured, or even killed on the field of play isn’t uncommon and is a useful tactic to ensure your opponent is stuck playing with less players than you have.

The game is true to the Warhammer universe, and remains shockingly accurate in its portrayal of the different races that exist. Dwarves are hearty and stout, relying on strength, but having very little mobility, while elves are the polar opposite. Other teams, like Skaven, Chaos, and Humans also inherit the traits you’d expect if you know the world, but it’s not a requirement to play. Developer Cyanide does a good job of explaining the strengths and weaknesses of each team through audible and visual cues that you’ll pick up. Some are subtle, some are very noticeable.

Career mode is a story-based walkthrough where players should start their experience instead of simply hopping into online or even building a team for the single player modes. The career does a wonderful job of introducing each aspect of the game — there are a lot of rules — in a way that’s not overwhelming and gives new players a chance to actually learn, something that Blood Bowl didn’t do when it originally released on PC in 2009.

It’s not without criticism though, and unfortunately some of the biggest criticisms come from the “random dice rolls” that occur throughout the game. Being turn-based, each time you attempt something, whether it’s a block, tackle, or other maneuver, you roll a dice on screen to determine success. If you have teammates nearby or your character has skills that enhance the move you’re attempting, you can roll two or three dice, then choose the one you want to perform — a clear bonus. Unfortunately you’ll often find yourself failing on things you should clearly be able to do. Sometimes the game will tell you the rate of success and, despite being heavily favored, you’ll fail over and over again. It’s incredibly frustrating when you roll three dice and all three lead to failures, then you use one of your limited “re-rolls” to try again and get the same results.

The game can sometimes feel rigged.

The other issues are more technical, at least in the Xbox One version. To start, certain weather conditions cause noticeable frame rate issues. Icons that appear over a character’s head will sometimes span the length of the field, and character model animations sometimes clip through each other. The worst thing about the game is the load times, both during a game and loading it up. The AI can sometimes take two or three minutes on its turn before it starts moving. With loading screens taking a minute or more in some cases, having your opponent drag their feet is just agonizing. It’s not going to ruin your overall experience, but it’s noticeable nonetheless.

Despite the frustrations and visual hiccups, the game is incredibly fun, though it needs to be mentioned that the gameplay is very slow. You’re not playing Madden, you’re playing a digital reconstruction of a tabletop game. Every team has a variety of character models, each with their own strengths and weaknesses to be used or exploited during a match. The announcers, Jim (a vampire) and Bob (an Ogre) aren’t voiced particularly well, but their dry humor and constant Warhammer references are enough to make any fan crack a smile.

It’s been six years since the first iteration of Blood Bowl appeared in a video game and, despite some flaws, the team at Cyanide has made some wonderful strides in bringing Blood Bowl 2 to the attention of the masses. With online play and enough single player content to keep you entertained for a long time, including team and stadium creation, the $49.99 price is worth it. The downside is that if you’re not immediately in love with this kind of gameplay, there’s nothing added later in the game that will change your mind.

You should also read: Move over Saints Row, there’s a new ridiculousness in video games