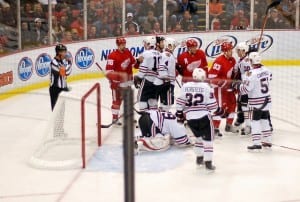 The Blackhawks found their missing mojo. The first-seed team rallied in the last two games against the Detroit Red Wings to force the playoff round to go into Game 7.

The Chicago Blackhawks evened out the series, 3-3, with Monday night’s win. The winning goal, provided by Michael Frolik from a penalty shot, not only won the game but also put Frolik in the record books.

Frolik became the first player in NHL history to score off of two penalty shots in the playoffs.

“I was kind of surprised that I was the first one in history,” Frolik said. “It’s a little bit special.”

But the Blackhawks were strong overall in Game 6, finishing the game 4-3 over the Red Wings.

Detroit attempted to come back. With 52 seconds left, Damien Brunner pulled the Red Wings up one from a two-point deficit to the Blackhawks.

After a strong start to the series, the Red Wings are hoping for a repeat of their first round of playoffs. The seventh-seed Red Wings beat second-seed Anaheim in Game 7 of round one.

“I love Game 7s,” Red Wings Coach Mike Babcock said. “We’ve got a chance to push them out of the playoffs. It should be a lot of fun.”

On the other side, the Blackhawks are looking to fan support to give them the win on Wednesday. The home-ice advantage could give them what they need to move on to the Western Conference finals.

“We’ve got that momentum, we want to keep it,” Blackhawks’ captain, Jonathan Toews, said.

If the Blackhawks win, they’ll face either the Los Angeles Kings or the San Jose Sharks in the Western Conference finals. Los Angeles and San Jose play tonight at 9 p.m. ET.

The final Blackhawks-Red Wings game is scheduled for Wednesday at 8 p.m. ET.