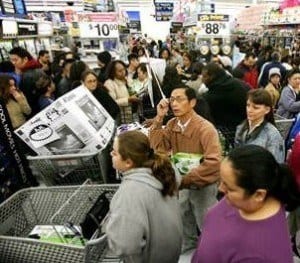 Walmart has released their Black Friday deals with doors opening up at 10pm.

Walmart has head-started the Black Friday deals of the year with their announcement that the store will open at 10pm on Thanksgiving with electronics going on sale at midnight.

Between the $1.96 dvds to the $10 Crock-Pot, Walmart’s attempt to lure customers earlier this year just might work in their benefit.

According to Dan de Grandpre, CEO of dealnews.com,“Thanksgiving night openings are much more common now.”

The act in retailers creating longer hours stems from the higher amount of customers that participate in Black Friday. Retailers understand that they have to compete with the option of shoppers not even leaving their homes and opting in online shopping.

Grandpre says that Black Friday doesn’t always mean good deals, sometimes it’s just a trick to attract customers and that it is not a pleasant time to shop, meaning you should aim to purchase big ticket items like a TV or gaming system.

Are you going to leap into the chaos known as Black Friday or are you sticking to online shopping? Let us know.